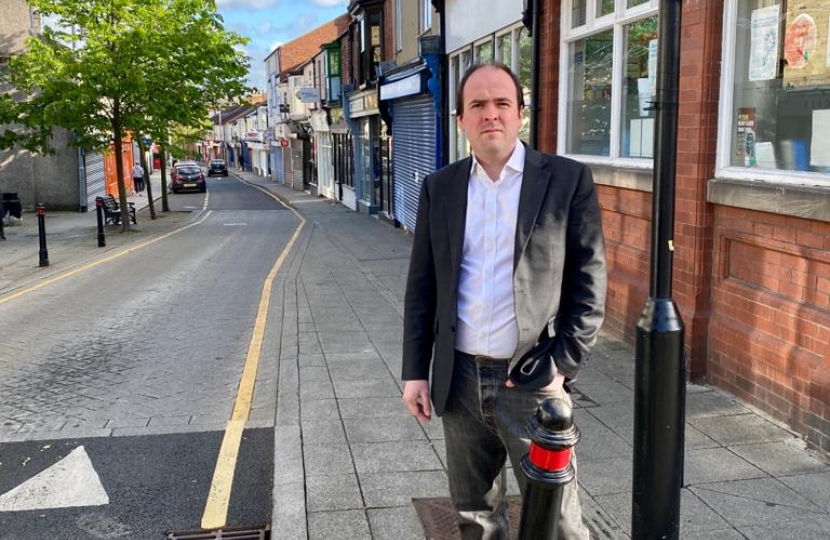 Since becoming MP for North West Durham, Richard Holden has been campaigning hard for local high streets in Consett and the Crook, Willington and Tow Law three towns area.

Before the 2019 General Election, Durham County Council (which is Labour-led), backed four towns in County Durham in bids for the High Streets Funds. The High Street Fund is a Government initiative that aims to boost and revitalise high streets across the UK – it was set up to support and fund plans by a local area to ensure that all our high streets get the funding they deserve to make them fit for the community.

It seemed obvious to Richard that Consett and the three town area needed a boost to their high streets. It was something people brought up a lot on the doorstep when he was campaigning – how was he going to rejuvenate their local areas, and ensure that local people had somewhere to visit, eat, shop and spend time?

He was therefore delighted that, when he asked in Parliament, the Government confirmed that it is re-opening the High Street Fund to ensure that new MPs like Richard do not miss out on a chance to get much needed funding for their constituencies. You can read about the High Street Funding and future programs by visiting this link. There is no guarantee that North West Durham will get the funding, but you have to apply to even be considered, so Richard has written to the CEO and the Labour Leader of Durham County Council to ask for their support, and he has also spoken to his colleagues about it in Westminster.

Commenting, Richard said ‘The Government wants every part of the UK to succeed and get the investment it deserves – not just London and the South. It would be an enormous boost for our local economy and community if we were to win our bid, and whilst it would take time to see the changes that would come about as a result of the funding, I am confident that Consett and the three towns area would really thrive from the investment. I will continue to push for investment in North West Durham, whether it’s investment in education, the NHS, transport infrastructure or boosts for our local towns. If you have any questions or issues, drop me an email at richard.holden.mp@parliament.uk – I am always keen to hear about your comments or suggestions for how we further improve all our local communities. I will continue to update all of you about my work in this area.’

If you would like to hear more about Richard’s news and what he’s up to in North West Durham, you can use the form on this page or you can sign up to Richard’s newsletter here.

Richard welcomes the news that 10,500 jobs have been directly supported in North West Durham by the Furlough Scheme

Richard Holden, MP for North West Durham, has received confirmation from Martin Glenn, Chairman of The Football Foundation, that Tow Law Football Club have been successful in their application for a Pitch Preparation Grant worth £1500.