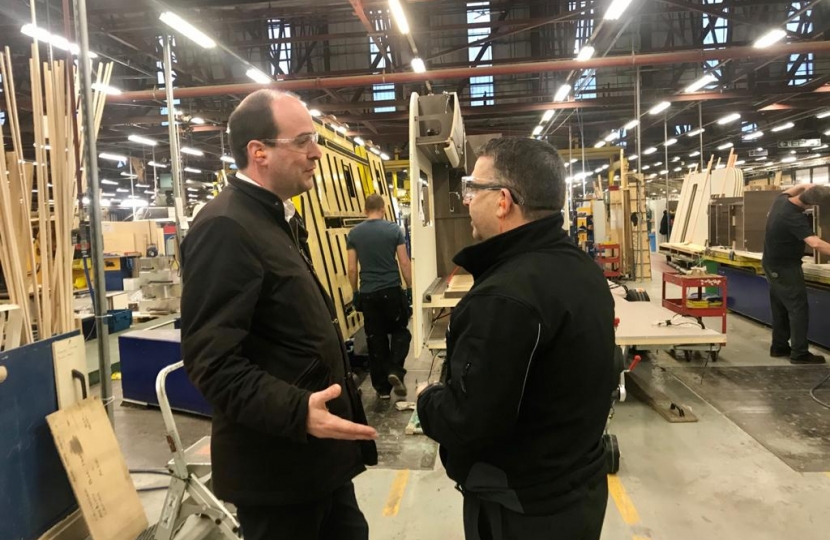 In September 2019, Vehicle Excise Duty (VED) and road tax on new motorhomes faced increases of about 705%. This was due to EU Regulation 2018/1832, which states that motorhomes were to be classed and therefore taxed differently. People that were buying a new motorhome suddenly had to pay about £5000 in tax in just five years of ownership, compared to a previous tax of about £1200. As a result of this, motorhomes sales around the country dropped around 10%, although this figure was higher up in North West Durham.

This was a particularly personal issue for Richard. North West Durham is one of the biggest motorhome producers in the UK, with companies such as Elddis based in the area. As sales across the country dropped, so did manufacturing and this meant that staff in motorhome manufacturing factories faced redundancy – entire supply chains suddenly faced extremely uncertain futures. It also had a knock-on effect on local caravan parks and domestic tourism – far fewer people were booking holidays to the beautiful countryside in North West Durham.

Richard started a huge campaign to get the tax reversed. He got the BBC up to North West Durham to discuss the issue, he met with the Chancellor several times and had quite a few discussions with Downing Street and the Treasury about the issue. It was raised with national media, which you can read about here and here , and he spoke with a number of colleagues in Parliament about it at great length. He knew it was a massive ask of the Chancellor as it was a tax that affected only a few very specific parts of the country but, for North West Durham, it was a real problem.

A full reversal of the tax hike was announced in the March Budget. This was a huge success for North West Durham – not only had literally hundreds of local jobs been saved, but it meant that our domestic tourism that brings so much to our economy was no longer in any danger of facing difficulties further down the line. You can read Elddis’ press release about it here .

Commenting, Richard said ‘When I was elected as MP for North West Durham, I had never heard of the motorhomes tax – it was never mentioned when I was out campaigning and the previous MP had never flagged it as an issue, either locally or in Westminster. However, it became clear very quickly that it was going to have a hugely detrimental impact on the constituency unless I stepped in. It seemed a really counter-productive tax, one that disproportionately affected the North East. Not only was the tax damaging the local and national economy and affecting jobs, but it was having a detrimental effect on the environment as people decided to fly abroad for a holiday.'

'I was absolutely delighted that the Chancellor took the decision to reverse the tax. I was really pleased that the negative effects caused by the tax were recognised. As the MP, I am not going to stand to one side and let local businesses struggle and employees lose their jobs. It was such an effort to get the tax reversed and, in politics, nothing is certain until it is done, so I was so pleased that all our efforts paid off. I will always work extremely hard for the constituency and put all my efforts into campaigning against things that have a negative effect on us. The Government wants to make sure that the economy works for everybody.’

Richard Holden, MP for North West Durham, has today expressed his delight that motorhome, car and caravan showrooms will be able to reopen on June 1st.

In September 2019, Vehicle Excise Duty (VED) and road tax on new motorhomes faced increases of about 705%. This was due to EU Regulation 2018/1832, which states that motorhomes were to be classed and therefore taxed differently.