Richard Holden working on a replacement to Shotley Bridge Hospital 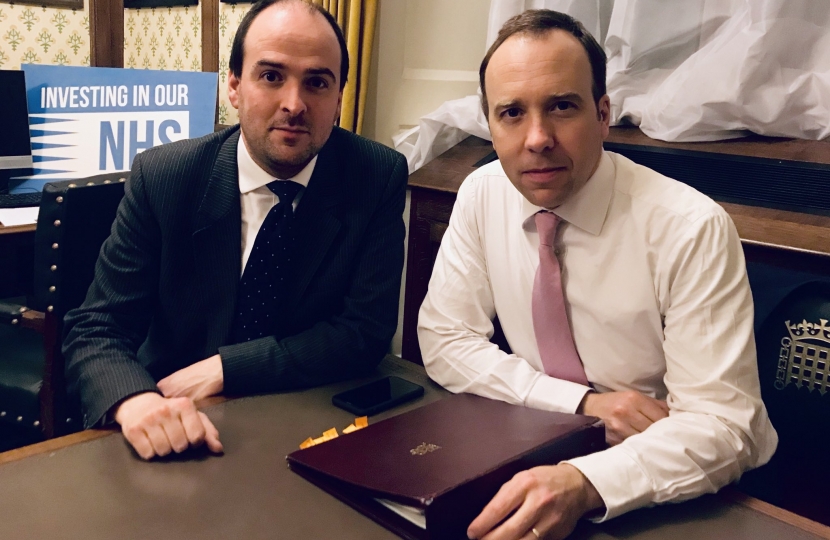 One of the key commitments Richard Holden made to the constituents of North West Durham during the election campaign and upon becoming MP (you can read about his full list of promises here) was that he would campaign for the local NHS. Richard’s mum works for the NHS and, when his dad was seriously ill, the NHS saved his life. He backs the NHS 100% and will work to protect and improve our local services.

On a national level, he backed the NHS Funding Bill in Parliament – this Bill will ensure that Government spending on the NHS will be £148.5 billion a year by 2024, which is billions more than what is currently being spent on it.

More locally, one of the most important things that he saw needed delivering was a new hospital at Shotley Bridge, and he has been campaigning to ensure North West Durham gets a replacement hospital. He was therefore delighted when it was announced that Shotley Bridge will indeed be upgraded, giving the people of North West Durham a better and bigger local health service.

Richard spoke about Shotley Bridge during the NHS Funding Bill debate, stressing that North West Durham’s rural areas need proper investment and support for local health services. He was also the first ever MP to mention Shotley Bridge at Prime Minister’s Questions in Parliament, and managed to get an assurance from both the Prime Minister and the Health Secretary that they would back a replacement hospital – you can watch him talking at PMQs about it here.

Having had discussions with the local clinical commissioning group (CCG) about a long-term business case for a replacement hospital, Richard met privately with the Health Secretary to discuss the long-term campaign and plan for a replacement hospital – you can read about their meeting here. Richard and the Health Secretary spoke at length about how the project would be signed off and managed, as well as some of the key issues his constituents have stressed about Shotley Bridge, including the access road and its location more generally.

Richard is now working closely with Durham County Council, the local CCG, the Department for Health and Social Care and local investors to discuss proposals for the new site and a business case for the plans for the new hospital. The new site will incorporate a new urgent care centre and we are working hard to ensure that the plans will include everything that the local area needs from a hospital – councillors have been working for months with constituents to help shape proposals. Richard and his team are continuing to speak regularly with a range of stakeholders, through groups such as the Shotley Bridge Hospital Support Group and the Shotley Bridge Hospital Reference Group.

Commenting, Richard said ‘I am beyond delighted that we will be getting a new hospital. Three local sites exist as options for redeveloping the hospital, including a potential site on the former Consett Steelworks at the Genesis site, or a redevelopment of the current site. The development of a new site by 2023 remains feasible despite the current public health situation. I will continue to update you all on the work I am doing to ensure that constituents have access to the best healthcare facilities that they deserve. Myself and my team are working really hard with local stakeholders, the council and the local healthcare service on this project. If you have any queries or issues you’d like to raise about the replacement to Shotley Bridge, our local NHS or what I am doing more generally for health and social care in the area, please drop me an email – I can be reached at richard.holden.mp@parliament.uk.’

You can sign up to Richard’s newsletter and hear more about the work he is doing for North West Durham here, or by using the form on this page.

Richard Holden MP recently conducted an online survey amongst his local community about their thoughts regarding local health needs, including whether local people thought that his campaign for a new community hospital to replace Shotley bridge was a good idea.  Over 400 responses were received w

Richard Holden MP welcomed the publication of statistics from the Department of Health showing that between March 2019 and March 2020 there was an increase in 444 to 6,348 in the number of doctors in the North East - the second highest rise in the country - and an increase of 702 nurses to 19,077

Richard Holden MP has joined with our county's other Conservative MPs, Dehenna Davison from Bishop Auckland and Paul Howell from Sedgefield, in a call to Durham Council to exclude monuments to those who fought for Britain and for freedom from the #MonumentReview that Durham Council have started.

Richard Holden, MP for North West Durham, has received confirmation from Martin Glenn, Chairman of The Football Foundation, that Tow Law Football Club have been successful in their application for a Pitch Preparation Grant worth £1500.

The new NHS Test and Trace service has launched across England to help keep the virus under control and enable lockdown to be lifted. Full information can be found here.

Like many of our constituents, we have spent the last few days with a feeling of disappointment, anger and frustration.