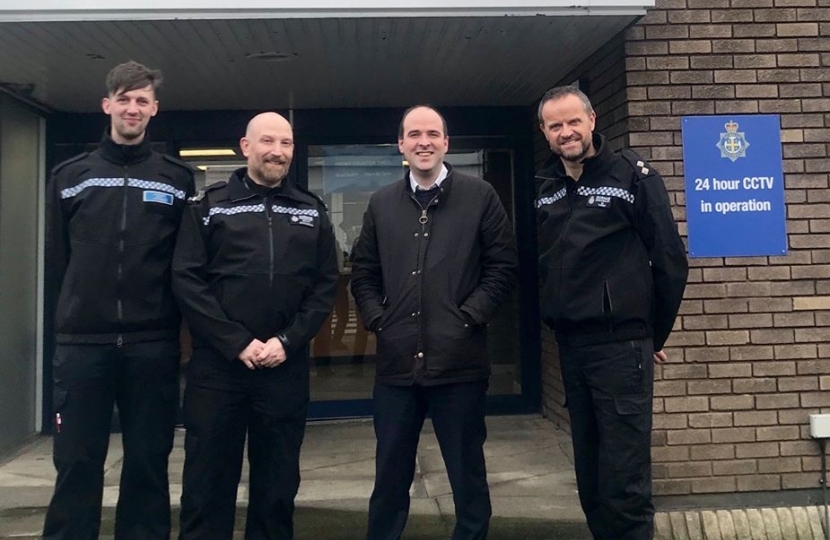 Joy was announced as Labour’s PCVC candidate in March and the election saw her get just over 80,000 votes, winning by the narrowest of margins, just 51 percent to 49 per cent on a turnout of 35.37%. She will serve a three-year term and has previously been a local councillor.

In a letter to the new PCVC, Richard and his Conservative MP colleagues have congratulated Joy on her election win and asked for a joint meeting to discuss policing, crime, anti-social behaviour, and police presence in County Durham. Of particular concern is ensuring the retention of local police stations across the county.

The four MPs have also requested to discuss the proposed centralisation of custody facilities at Spennymoor, which is set to cost around £21 million and could drastically reduce policing visibility across the county, as Joy and her opponent raised during the campaign and have asked for wider discussions around reviews of police facilities and how this would impact local police stations. Issues such as the future of police stations at Stanhope, Crook, Consett, Barnard Castle, and Anti-Social behaviour concerns in Bishop Auckland, Crook, Wingate and others will also be raised by local MPs.

Richard has previously raised concerns about the police estate plans, which you can read about here.

“Along with my County Durham colleagues, I want to congratulate Joy on her election as our new Police, Crime and Victims’ Commissioner.

“We have written to Joy to ask to discuss policing and crime in County Durham – issues which are frequently raised by our constituents and which some communities have real concerns about. Many of our constituents have raised issues around rural crime, anti-social behaviour and drug dealing in our towns, and many are concerned about the proposed custody facilities at Spennymoor, which never went to a proper consultation.

“Joy was very forthright during her campaign about how she wanted to look again with full public involvement in the one central custody suite proposal and we sincerely hope that Joy agrees to meet with us at some point over the next few weeks to discuss these issues, and are very much looking forward to working with her over the next few years to ensure that our communities get the support they need.”

“I am opposed to the loss of our custody capacity in Darlington. The people of Darlington want to see their bobbies on the beat not acting as a taxi service for detainees. I want to see the new PCVC deliver on the people’s priorities and stop this plan.”