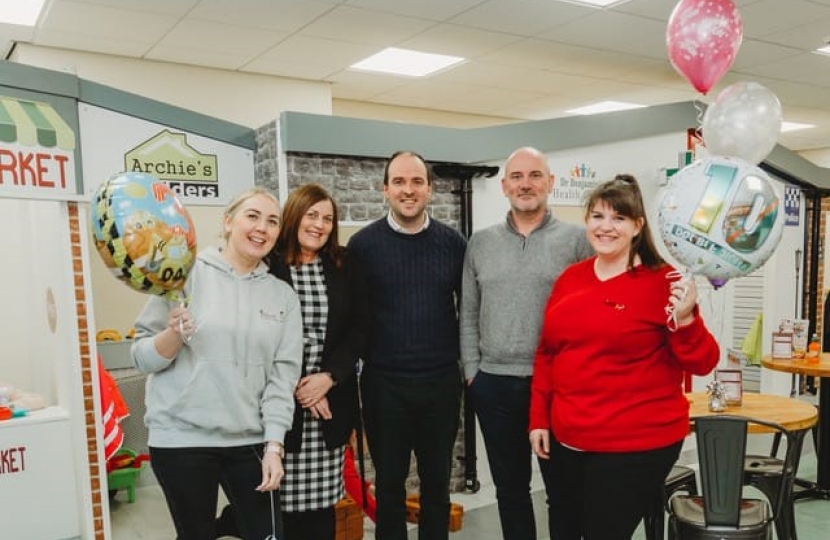 Richard Holden, MP for North West Durham, was lucky enough to be invited to celebrate the tenth anniversary of Lingotot. Lingotot was set up by Angela Sterling and is based in Consett. It started as a small number of French classes in the community and has grown to a multinational organisation. They teach language classes to thousands of children from aged zero to twelve every week, whether it’s in the community or through schools and nurseries. Angela is now the Regional Chair for Encouraging Women into Franchising for all the work she’s done.

They celebrated their anniversary with a language-themed party, which involved a French session for children and their parents followed by a (strictly bilingual!) play time for the kids. Richard managed to catch up with Angela and a few others that work there and hear about how their business has grown and their future plans. He also had a chance to catch up with some of the parents and hear about their experiences with Lingotot.

Commenting, Richard said ‘It was a real pleasure to see a local business that started in Consett thriving nationally and internationally. I really congratulate everyone at Lingotot for all their achievements. They’ve done so much to give back to the local community and I highly encourage everyone in the area to check them out – they’re absolutely brilliant and learning a new language is such a good thing for kids to be doing. I’m planning to do a lot to support and push for better educational services up in North West Durham, so it was brilliant to get the chance to talk to someone who has already done so much for the local area. They even took some time to try and teach me some French, although I am not sure my language skills are up to scratch!’

Richard is hoping to visit again for another catch up in the future and wishes Angela and her team all the very best for the future as they continue to thrive and support the local community. If you would like to hear more about Richard’s news and what he’s up to in North West Durham, you can fill in the form on this page or you can sign up here.