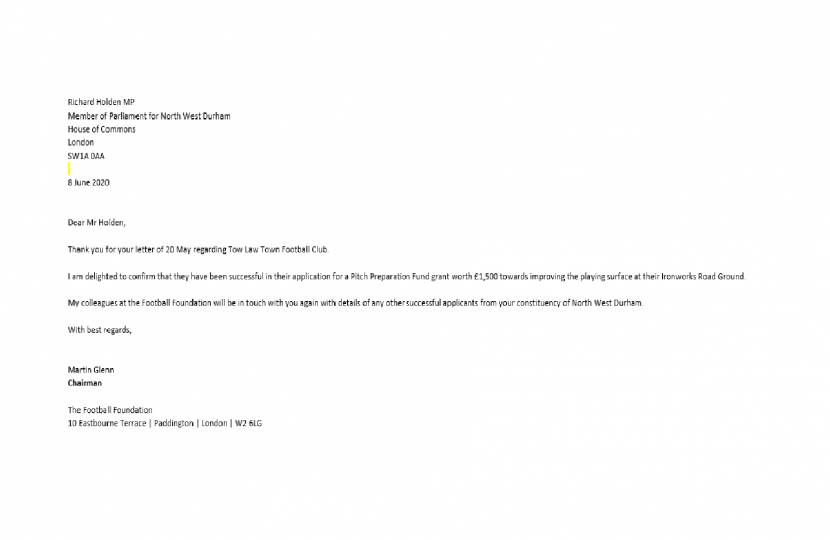 Richard Holden, MP for North West Durham, has received confirmation from Martin Glenn, Chairman of The Football Foundation, that Tow Law Football Club have been successful in their application for a Pitch Preparation Grant worth £1500. This will go towards improving and sustaining the playing surface at the Ironworks Road Ground.

This follows a letter that Richard wrote to Nigel Huddleston MP, the Minister for Sport in the Department of Culture, Media and Sport and the the Chairman of the Football Foundation highlighting the issues Tow Law is facing. Tow Law AFC was seriously affected by significant subsidence, which has led recently to the emergence of a sizeable crater in the pitch. This has rendered the pitch unusable as it is now extremely safe, especially as there are concerns that the hole will continue to expand. You can read about the work Richard was doing for Tow Law AFC and other football clubs in North West Durham here.

Local people have raised over £6,000 by crowdfunding already to help the club and this extra money from the Football Foundation should help aid local efforts.

Commenting, Richard said ‘I am delighted that Tow Law AFC will be receiving a much-needed grant from The Football Foundation, and I’d like to thank those at The Football Foundation for looking into this. The pitch at the Ironworks Road Ground is totally unsafe and unusable at the moment and is it desperate need of repair. This will give the club reassurance for the future of the ground and, most crucially, will ensure that the pitch is safe for all those that use it.’