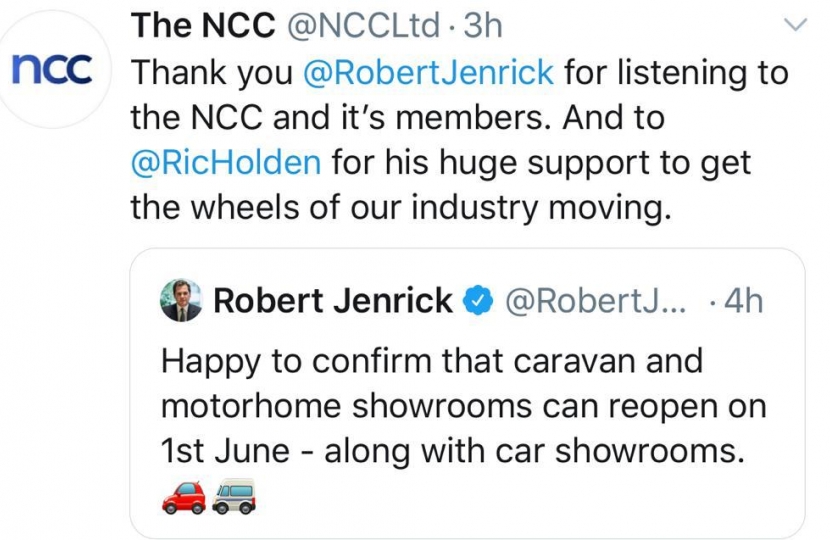 Richard Holden, MP for North West Durham, has today expressed his delight that motorhome, car and caravan showrooms will be able to reopen on June 1st.

Richard has a number of showrooms and a major caravan & motorhome manufacturer in his constituency, all of which have seen a huge decline of sales due to coronavirus.  Following conversations with local firms and the National Caravan Council, Richard raised the issue with the Chancellor and other senior figures in Government to express his concerns for the industry and to push for the safe reopening of showrooms across the country.

Richard previously led the successful campaign to get the motorhome tax reversed, which you can read about here. Vehicle Excise Duty (VED) and road tax on new motorhomes was facing an increase of 705%, which would have had an enormously disproportionate effect on North West Durham as it is one of the motorhome producers in the UK. Richard ran a huge campaign to get the tax reversed and the successful results of the campaign were announced in the March Budget.

“I am delighted that it has been confirmed that caravan, car and motorhome showrooms will reopen on 1st June. Following conversations with local businesses and the National Caravan Council I spoke with the Chancellor and senior members of the Government to push for the safe reopening of showrooms.

“It's vital that sales start to pick up - getting sales moving helps the whole supply chain and will help the entire industry get moving following the public health crisis. Hundreds of jobs in North West Durham rely on the manufacturing and sale of caravans, car and motorhomes and the reopening of showrooms will have an enormously positive impact on our local economy.”

Richard Holden, MP for North West Durham, has welcomed the news that the Tow Law Mobile Post Office will be available whilst Wolsingham Post Office is temporarily closed.