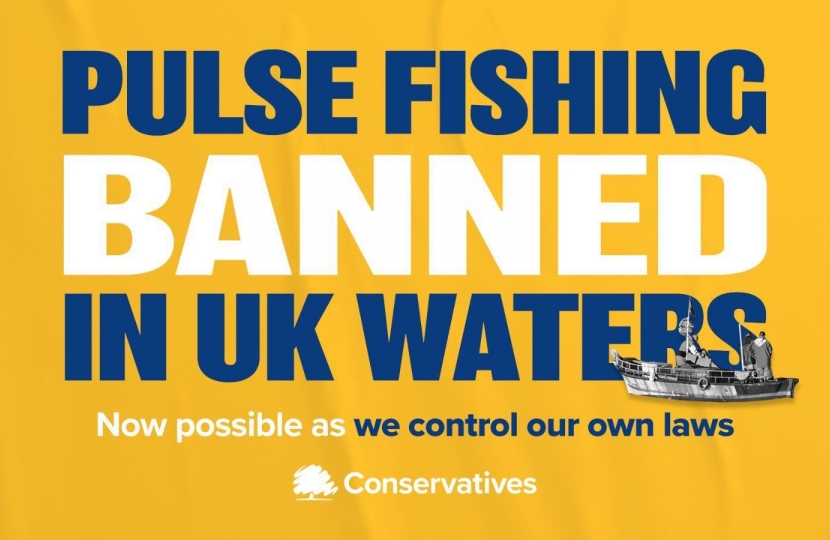 Richard Holden, MP for North West Durham, has welcomed the news that, following the UK’s departure from the EU, the UK Government has banned pulse fishing in UK waters.

Pulse fishing is a practice where electrical currents are pulsed into seawater. The electric pulses cause bottom-dwelling fish to swim away from the seabed and into trawl nets. The practice is particularly controversial amongst environmentalists as it can fatally injure ocean species, damage marine wildlife and lead to huge stock depletions.

Pulse fishing has been an issue in North West Durham, and, over the past year, hundreds of constituents have got in touch with Richard about fishing methods and how these can be improved once we leave the EU. Constituents have raised that they would like to see more environmentally friendly fishing methods that do not have a detrimental impact on our oceans and marine wildlife. Richard raised these concerns with Government, and pulse fishing has now been deregulated in all UK waters. Crucially, this doesn't just include UK territorial waters (the so called 12 mile limit around the UK coastline) but the whole of the UK's hundreds of thousands of square mile of Exclusive Economic Zone (EEZ).

The UK started working to remove authorisations for pulse trawling in our EEZ in December 2018 with the statutory instrument laid in February 2019 but could only come into force across our EEZ when we regained control over our own fishing waters this year. France has implemented a measure but as they're in the EU it can only extend to their territorial waters, not more widely as their broader fisheries are shared under EU law, and given their very limited amount of territorial water in ICES regions IVc and IVb (the English Channel and North Sea where pulse fishing takes place), it is unlikely that there was any pulse fishing in their territorial waters of these areas.

“I am delighted that pulse fishing has been banned following our exit from the European Union. Pulse fishing seriously damages our ocean wildlife and marine conservationists have been calling for it to be banned. Pulse fishing also has a devastating effect on the livelihoods of small and independent fishermen.

“Now that we have left the European Union, we are able to implement laws based on what the people want. The concerns of my constituents have been listened to by Government and acted on.

“The banning of pulse fishing shows that this Government is committed to the environment and ensuring that we have sensible domestic policies that reflect what people voted for in the 2016 Brexit referendum and the 2019 General Election.”