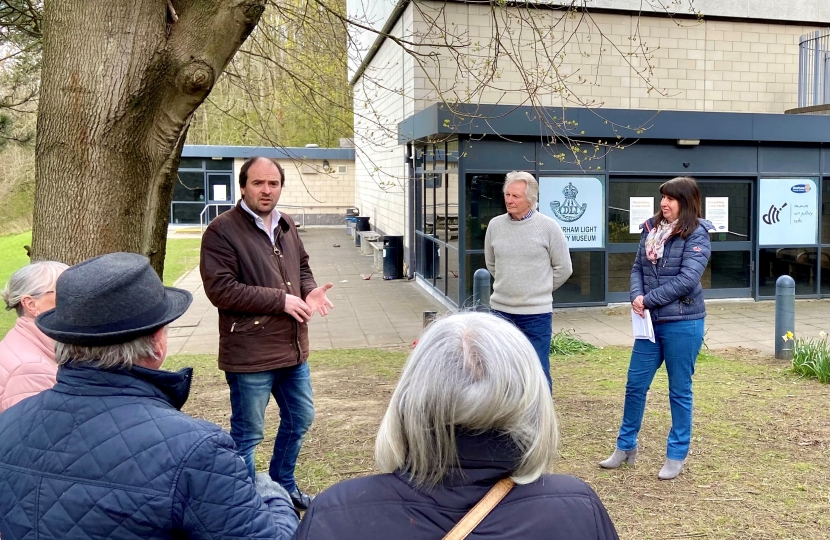 Richard Holden, Member of Parliament for North West Durham, has visited the now closed Durham Light Infantry (DLI) Museum as calls grow for the museum to be reopened on its current site or the whole permanent collection to be put on display in  a new site elsewhere.

The Durham Light Infantry was a light infantry regiment of the British Army in existence from 1881 to 1968. The DLI Museum was set up in Aykley Heads to display soldier’s uniforms, medals awarded to soldiers, tanks and weaponry dating back to 1758. There were interactive displays for children, a café and an art gallery and the museum was a key part of the local community and a tourist attraction. The council voted to close the museum in 2016 for unknown reasons, despite campaigners trying to prevent its closure due to concerns that the history of the regiment and the contribution that Durham soldiers made to the United Kingdom will be forgotten.

Richard visited the closed museum and met with campaigners who are keen to see it reopened and the collection displayed. Richard expressed his desire to see a permanent exhibition space for the DLI opened in North West Durham, and discussed with the group what the loss of the museum has meant to veterans, the wider community and the history and culture of North West Durham. Rob Inglis stated that the council must ‘hate our military history’, expressing his anger that they had sold silver worth £60,000. Carrol Robson stated that their ‘legacy has been closed down’ and her husband, Peter, stated his sadness the impact that the closure has had on the community, saying ‘children used to come and learn about the sacrifices the DLI made for their freedom’.

“I want to thank campaigners for meeting with me and hosting me at the old DLI museum. The museum showed the very best of County Durham, teaching the community about the sacrifices that had been made and the bravery and commitment shown by our veterans in protecting us and defending our freedom.

“The closure of the museum was devastating to veterans, campaigners and the community – thousands of people visited every year and the museum was a crucial part of the community, a place where people could meet to learn about our history. I am not surprised at the outpouring of anger and disappointment towards the council over their decision to shut the museum.

“I will be writing to the council on this issue and working with the Faithful Durham’s, a local veteran’s group. It’s obvious that the closure of the museum should never have happened and should have been beyond the vote of the council. I will fight for our veterans and their families and ensure that the collection is protected and the heritage of the brave soldiers who fought for us is defended.”