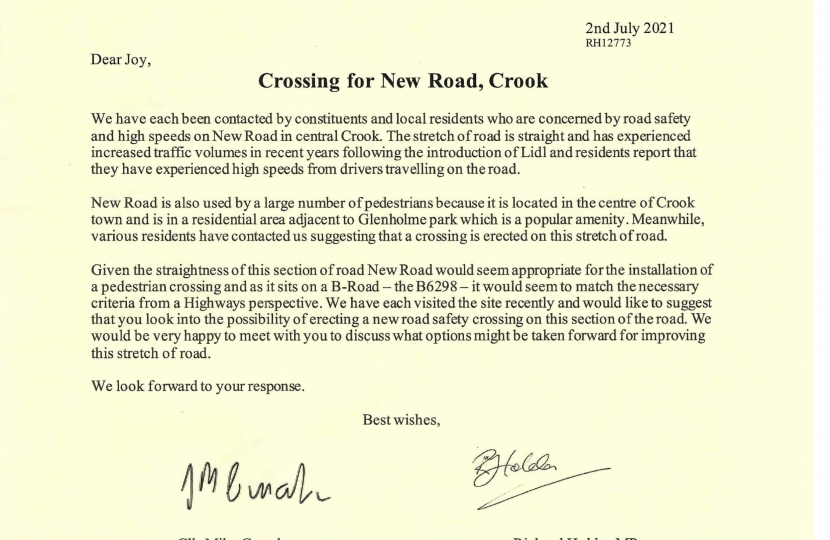 Richard Holden, Member of Parliament for North West Durham, and local councillors, Mike Currah, Patricia Jopling and Anne Reed, today wrote to the Police and Crime Victims Commissioner to raise the safety concerns of local people about the New Road in Crook.

The New Road in the centre of Crook town and by Glenholme park is often used by pedestrians. Though a straight stretch of the B6298 it was once a quiet road, until new Lidl has brought more and faster traffic to the area. Concerned for their safety local people wrote to their councillors and to Richard about this change, asking that a new pedestrian crossing be laid on this part of the road.

Richard and the local councillors and having seen for themselves where a new crossing might be put in, they have written to Joy Allen, the Police and Crime Victims Commissioner of Durham Constabulary, asking her to consider the proposal.

Richard and the councillors have offered to meet her, hoping discuss the easiest and quickest way to make the New Road safer for everyone.

“Quite a few of my constituents had written to me about this stretch of the New Road.

“I know this part of the road and with the councillors, we do not see why it would be suitable for a new crossing.

“We are of course open to any suggestions Joy may have instead and we are keen to meet and discuss the matter. I hope we can resolve this quickly so that people can go back to enjoying the centre of Crook on foot. Walking is a healthier and more pleasant way to get around and I hope the improvements we are looking to make will encourage more people to do so.”