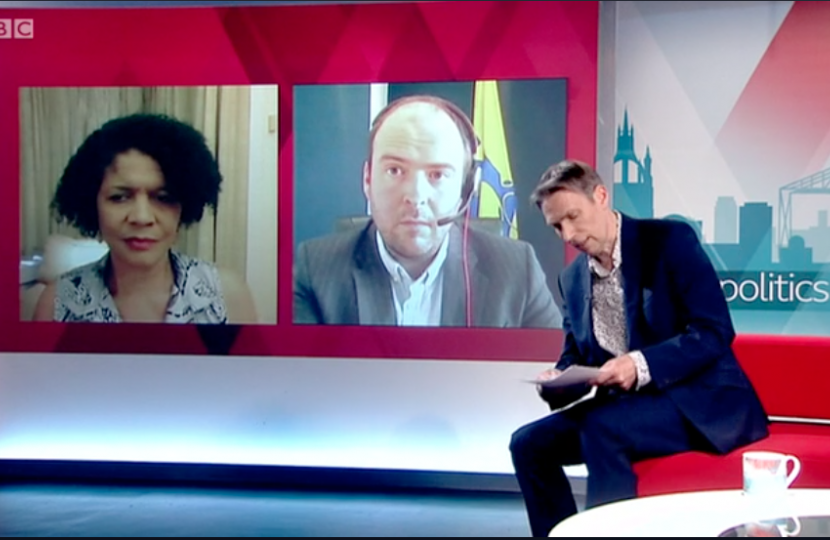 On Sunday, Richard Holden MP was invited on BBC Politics North, speaking with Richard Moss which you can watch here.

Given the reduced rate of hospitalisations and the fact that the Government had been willing to delay the end date once before, Richard Holden MP dismissed claims that the Government was not data driven, arguing that the success of the vaccination program makes the 19th of July a sensible day to end all restrictions. He also called for a balanced approach, pointing out the need to clear the NHS backlog and support the economic recovery.

On self-isolation Richard, having been making the point to ministers previously, supported a more sensible approach to 'pinging' from the NHS app and how guidance on self-isolation should be interpreted on a local level.

Asked specifically about cases in the North East Richard Holden MP spoke about how important double vaccination is to be able to lift restrictions safely across the whole country.

Later in the program, Richard and Chi were also asked about Council cuts across the North East. Asked about reserve funds, Richard mentioned the plans the new Joint Administration have to make best use of Durham County Council's assets, including his call to bring more civil service jobs to The Sands and Aykley Heads sites. You can watch Richard Holden MP raise the point in Parliament here.

Finally, having heard the concerns of the people of North West Durham on hedgehogs, asked about the debate in Parliament this week, Richard was proud to share that it was when he worked at the Department of Transport that the small mammals sign, with the hedgehog as its icon, was introduced to better protect them. To further protect the hedgehog Richard Holden also spoke about how he was backing the Government's new Environment Bill which will give set out environmental protections to allow the hedgehog to thrive.