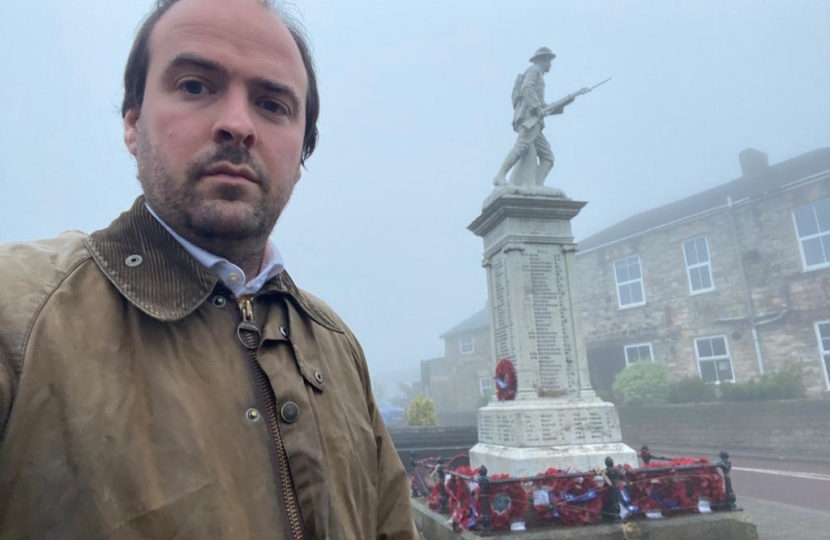 Our physical and cultural heritage is important. It reflects the history of the people of our islands but also the history of a nation that is a major European and even a global power.  Our heritage also reflects our collective history as a seafaring and trading nation; the birthplace of the agricultural and industrial revolutions (much of which can be found across County Durham) and a lot more besides.

When I look at the benches around me in Parliament, I see people whose background is a reminder of that history of migration.  Whether it’s people who, like me, are descended from farming communities that migrated to the industrial towns in the 19th century to become mill and factory workers or those like Rishi Sunak, Kemi Badenoch, Priti Patel, or even our Prime Minister, Boris Johnson, whose ancestors - in a variety of ways and by a wealth of routes - ended up migrating more recently to Britain.

Our United Kingdom is a product of that history and our Britishness and patriotism has often been a force for good, the most obvious example being when Britain stood up against Hitler, while the totalitarian states of Nazi Germany and the Soviet Union were carving up Poland in 1939. There have been, of course, darker moments too and it’s right that they should be explored, questions asked, events revisited, and history taught to include both the bad and the good.

The slave trade, much discussed recently, was clearly evil and Britain, some of whose traders had profited hugely by this trade in human misery, then became one of the first nations on earth not to just abolish slavery but to fight against it.  Enoch Powell and the other racists were wrong later in the 60s when they stirred up inter-racial tension.  Their idea, that to be British basically meant that you had to be white was also nonsense and based on a fundamental misunderstanding of our country, it's past and its present.  And the re-emergence of anti-Jewish racism in the last few years – those who believe that “The Jews” are behind all the bad in the world is clearly bogus drivel too. Whoever you decide “they” are – "they" clearly haven’t and aren’t “taking over”. The reason for that is simple. “They” are part of “us” – Britain is nation of waves of emigration, immigration and internal migration and those who've attempted to use 'identity politics' based on ethnicity to divide us have always failed.

Historical figures, from Capt James Cook to Gandhi are not without controversy - including in terms of their attitudes to race. Our political history too is littered with negatives and positives - like when Harold Wilson passed the 1968 Immigration Act – largely out of political pressure from the fear that Britain might have to give refuge to the Ugandan Asians. In the end, in 1972, Ted Heath gave them asylum in Britain when Idi Amin took everything from them and demanded they leave Uganda, just like Amin had threatened. No party has a perfect record on this issue - and there are no perfect people, no perfect story.  Attitudes to race – especially when seen in the context of their time - are part of a chequered history, but they are usually just a part of that history.

Aside from the debate around individuals – which is rightly the subject of active discussion among historians - some things are clear to me.  The first and most important of those is that we are a country that is established on the rule of law and a fundamental part of that is that we all are equal before it.

Mob rule is anarchy.  The danger of anarchy is that one day the mob does what you like, so you go along with it, some will even celebrate it.  But what happens the next day? When your opinions don’t chime with those of the mob? You call on the protection of the state and demand the rule of law. We are better than hypocrites on this fundamental issue. Britain has the rule of law and democracy.  Change happens without mob rule, violence and disorder. In fact mob rule is the way to guarantee lasting change doesn't occur.

The reason the statues in the former Soviet Union were toppled in the late 80s and early 90s is that there was no other way. There was no democracy and no ability to express yourself.  Here, we can decide how we manage our public history and we can do so democratically.  Views can be contested, debated and changed. That’s the way you deliver lasting change, by convincing people not by circumventing them.

And to those who say that violence is the only way to get what you want - I say that that is defeatist rubbish. The last few decades have shown that change can happen. In 1979 Britain was the first major Western country to elect a female head of government. In 2008, the United States elected the first black president. Attitudes towards gay people. Attitudes towards the disabled. Attitudes towards mental illness. The role of women in society and the economy.  Change isn’t just possible; it’s happened and it’s happening via democratic means.

The second point is that history and historical figures are, like each and every one of us, complex. There are very few 'Mother Theresas' in this world. It’s so easy to project on people, especially those who are long dead, what we want them to be. Heroes or villains. Goodies and baddies.

Which leads to my third and final point.  We should be very, very cautious of just trying to tear things down, I am a Conservative after all, not a puritan.  Our area contains Roman history – much of this country was build on it.  Theirs was an empire built on slavery and oppression but I (hope) no-one believes we should plough up the Roman Villas at Ebchester or Lanchester or tear down Hadrian’s Wall. A few centuries ago Durham Cathedral was ransacked and the statues smashed by the reformist protestant extremists of the day. I fear we are sliding towards mob vandalism at this time too as people wilfully by-pass the democratic means to deal with their concerns.

And that brings me onto events of the last 24 hours.

The great figures of our island story, like Churchill, should not have to be covered.  The Cenotaph on Whitehall should not be hidden away.

That brings me to what is happening locally.  The Labour Leader of Durham Council has just announced that they will be “reviewing” ALL statues and monuments. This is typical of the knee-jerk social signalling we’ve come to expect.  In normal times this would be ridiculous but in the heat of the global Coronavirus pandemic it's down right irresponsible when the council should be using all of its staffing efforts to work with national government to protect health and to rebuild our local economy post-Covid-19. If the Labour council wanted to do something useful in the future for the cultural heritage of our community, they could spend resources on looking at how we re-establish the Durham Light Infantry museum that they closed down, to teach young people about the history of the local heroes who sacrificed themselves for our freedom. I be delighted to work with them on that if they ever were so inclined.

Furthermore, as your local MP I’ll make one thing very clear.   Memorials and monuments to those who fought for this country must be excluded, immediately, from Durham Labour's local 'monument and statue review. I can't think of a major monument or statue in my own constituency that isn't to the men and women from our communities who fought for their country.  There should be no question that those who fought and in many cases died - from the defeat of Napoleon to the conflicts of the recent years - must be remembered and commemorated.  Surely that is a point that even the local Labour leadership must change their mind and agree with me on.