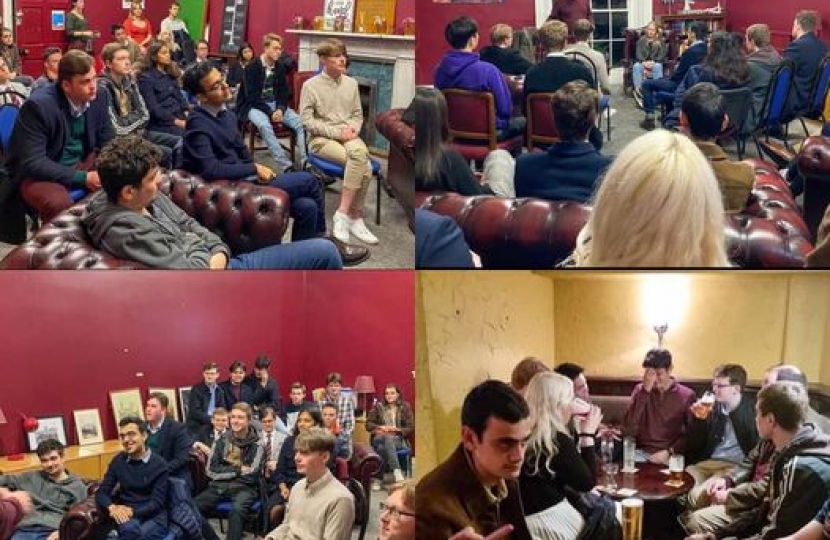 Richard Holden MP visited Durham University Conservative Association to speak to students. Richard spoke in a wider-ranging speech about the future of the country and the real concern about free speech on campuses across the country.

Free speech is such an important issue on our University campuses at the moment with debate being closed down, opinion silenced and both students and academics afraid to speak out. Recently in Westminster, Richard met with Professor Arif Ahmed from Cambridge University who, alongside fellow academics, fought back and won on a major debate around free speech, helping to stem the tide of the push back on Freedom of Speech.

Locally, a constituent spoke to Richard Holden. The student who had been studying at Durham got kicked out for three years on speech grounds. After fighting back via appeal, the student got it down to a year, and then finally, recently, this was overturned at national level and the University will now have to re-write their whole policy on Freedom of Speech.

Richard spoke on the Freedom of Speech Bill currently going through Parliament - link.  He was also picked following that as one of 17 MPs (out of 650) picked from both parties - to sit on the Committee to examine the Bill.

Richard is also Vice-Chairman of the All-Party Parliamentary Group on Durham University in Parliament.

"For too long we've seen free speech being eroded at our Universities and Colleges. Students feeling that they can't speak out, academics seeing their careers ruined and guest speakers - even those from the political mainstream - cancelled.

"I'll always stand up for academic freedom and against those who want to impose theory or their unsubstantiated world view as unquestionable fact.

"I always love popping down the the University of Durham and it was great to speak to such a lovely group of young people - including quite a few from the North East - but from across the UK too and even some international students too. This was my second visit to them so thanks for having me and see you again soon."