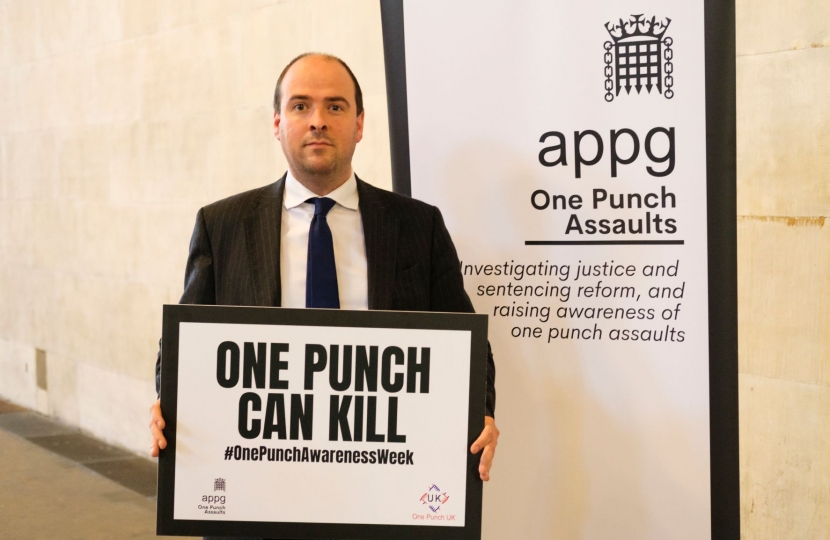 Richard Holden, Member of Parliament for North West Durham, yesterday joined his Bishop Auckland neighbour and colleagues from across the House to raise awareness for One Punch Assaults during One Punch Awareness Week.

Richard Holden MP was amongst a number of MPs who came together to raise awareness of One Punch Assaults, as a part of One Punch Awareness Week. You can read about in the Consett Magazine and The Northern Echo.

The One Punch charity and All-Party Parliamentary Group (APPG) headed by Dehenna Davison MP, whose own father was killed in such an attack, are using this week to promote the dangers around one punch assaults, focusing on the tag line ‘one punch can kill’.

This has been a reoccurring issue locally with over half a dozen people across the North East having suffered fatal and near fatal injuries from such assaults. Mr Holden's constituency has been particularly touched by such violence, when 19 year old Kristian Thompson was killed outside Consett's K2 nightclub following just such an assault.

“One punch assaults are dangerous and sadly often fatal.

“People in Consett will have heard the terrible story of Kristian, so I know how much such action will mean to his family and those who live there.

“I was glad to join Dehenna Davison MP and many other colleagues from across the House today to raise awareness of the destruction cases like this can cause.

“It was great to see so many colleagues from across the House join me in Westminster Hall today to raise awareness of the devastating impacts one punch assaults can have.

“I am incredibly grateful to Richard Holden MP for joining me today, as this is such a personal passion of mine and I appreciate their support on raising awareness of this issue.”