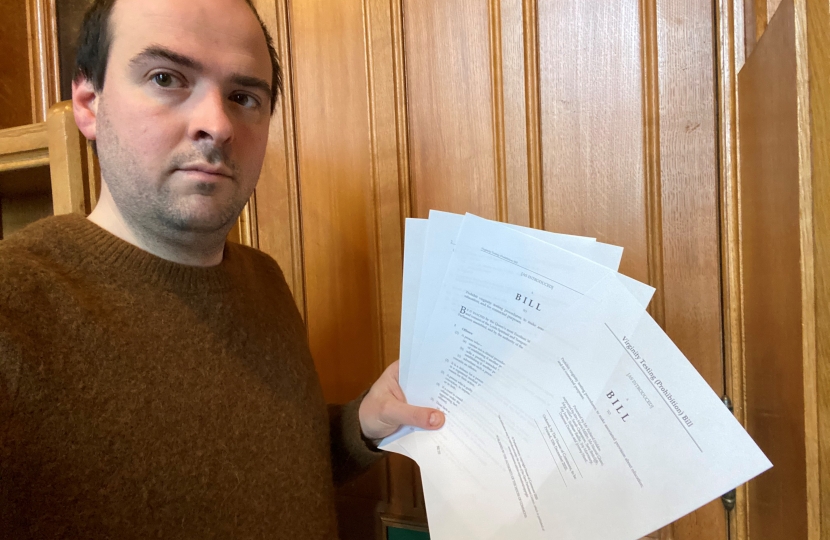 Richard Holden, MP for North West Durham, has today continued his campaign to see virginity testing banned in the UK as he joined BBC Radio 4 Woman’s Hour (listen here) to talk about the issue on the national stage in the run up to his Bill returning to the House of Commons.

Crucially, today, Richard’s Bill the “Virginity Testing (Prohibition) Bill” has also been published – outlining the full details of the law Richard is seeking to pass.

The Bill seeks to ban virginity testing procedures, ban the sale of products intended to test for virginity and states that punishment for breaking this law will be a fine, a prison sentence not exceeding twelve months, or both. The full details of the Bill can be found here.

Appearing on Woman’s House today alongside gynaecologist Dr Naomi Crouch and lawyer Natasha Rattu, Richard stated the psychological impact can last ‘many years’ and that he could not believe the practice is ‘still going on’ in the UK. Dr Naomi said the ‘whole concept’ of virginity testing is ‘nonsense’, calling them a ‘sham’. This follows Richard speaking to The Independent earlier this week (read this here), when he stated that getting a virginity test is ‘far too easy’ and stated that virginity tests embody ‘the worst aspects of an archaic culture’.

“I am delighted that today I was able to take my campaign to see virginity testing banned in the UK to the national stage and also to get the details of the Bill published ahead of Second Reading in Parliament.

“With millions of listeners weekly, I was really pleased to have the opportunity to bring this issue to people’s attention on Woman’s Hour. So called virginity testing is a sham and a medieval practice that’s about controlling women and girls; not something that has any place in Britain in 2021.

“Virginity testing has absolutely zero basis in science and it promotes the harmful and misogynistic idea that women and girls are objects to be examined for their ‘purity’ by men.

“I would like to thank the large number of cross-party MPs who have shown their support for my campaign and will continue to push this issue and campaign against it until we see this barbaric practice made illegal.”

You can find a link to the Bill here.