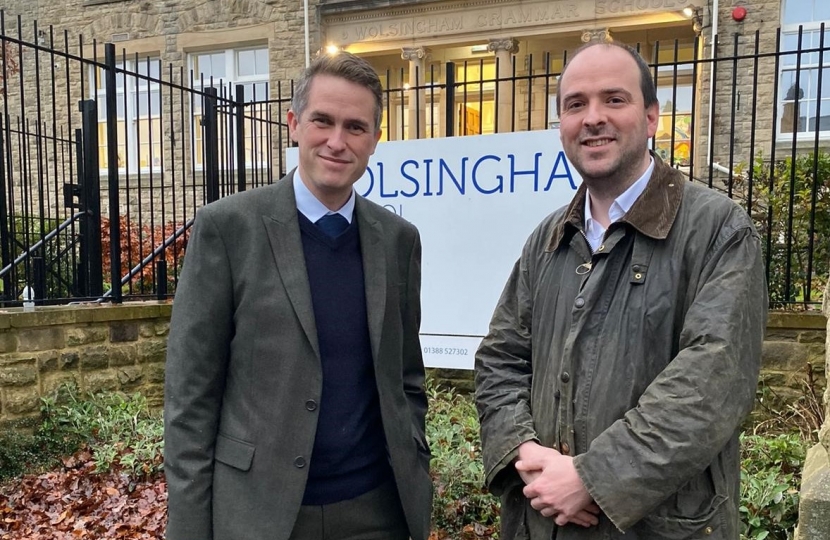 Richard is campaigning to keep the school in its suspended status to ensure that the possibility of reopening it in the future remains. Richard is working with Will Wearmouth, a Stanhope parish councillor, and Steve Cowie, a Wolsingham resident of over 25 years, as they, amongst many other Weardale, Tow Law and Crook constituents want to prevent the sixth form's formal closure. Richard has also spoken to the Education Secretary and the Regional Schools Commissioner about the campaign. You can read more about Richard’s campaign here and here.

Sadly, Richard’s campaign hasn’t been backed to date by either of the current Weardale Councillors, Anita Savory (who is the Chair of Governors at Wolsingham School) or John Shuttleworth. The local Head Teachers’ Committee will meet with the Regional Schools Commissioner on the 6th of May to make the formal recommendation for final review by the Secretary of State.

Richard has now revealed the results of a survey he ran on the campaign, which has shown that all bar a handful of constituents support his campaign to keep the school in its suspended status with a view to future re-opening. Respondents to the survey included former pupils of Wolsingham Sixth Form and parents with children at the school. In the more qualitative analysis constituents stated that the permanent loss of the Sixth Form would be a ‘great loss’ to the area, saying that the Sixth Form is ‘essential’ to the development and education of young people in the. Constituents pointed out that removing the Sixth Form would be a ‘barrier’ to education, and some constituents pointed out his frustration that Durham County Council have spent ‘£50 odd million pounds’ on a new County Hall, suggesting that they ‘spend a bit of money outside Durham City for once” and “wouldn’t’ have had to offload Wolsingham School if they’d had the right priorities.

“I am delighted that the overwhelming majority of my constituents back my campaign on Wolsingham 6th Form. People across North West Durham are extremely concerned about education provision in the constituency and do not want to see our young people go without access to good education. Stopping the formal closure is the first step in turning around the situation. I have been heartened by the support of the local community but really disappointed by the decision of the current ‘independent’ councillors in Weardale not to support my campaign.

“It is clear that this campaign is incredibly important to people across North West Durham, and I will continue to work on this campaign – we must stop the formal closure and keep the sixth form in its suspended status so that the potential for it reopening in the future remains on the table. Young people across North West Durham and the wider North East must have the opportunities they deserve to fulfil their potential, whatever path they choose to take, and I’ll keep fighting for those opportunities in our community.”