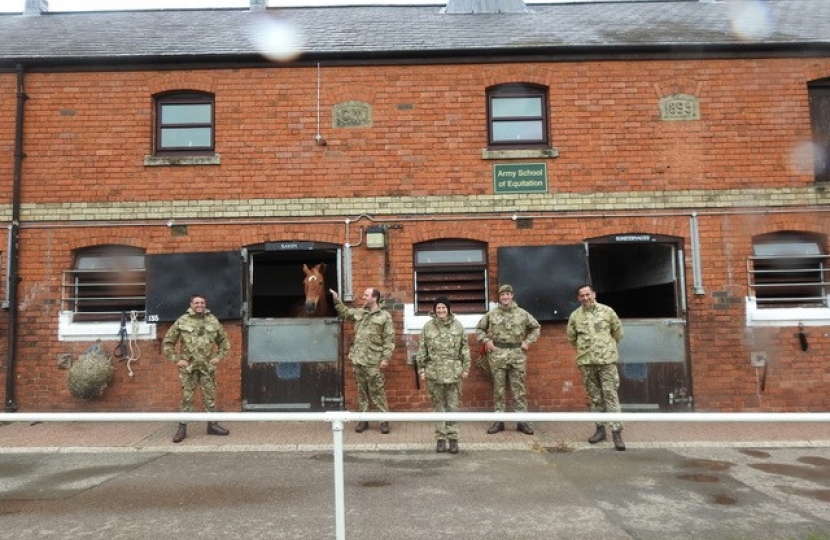 Established in 1989, the AFPS is a small programme that gives MPs and Peers experience in the armed forces, exposing members of both Houses of Parliament to first-hand experience of the services and giving them an understanding of what life is really like in the armed forces for the men and women who serve. The scheme aims to encourage understanding of what everyday life is like for those who serve and aims to ensure that MPs are well-equipped to participate in defence debates and questions in Parliament.

In 2020, 15 MPs were selected after application to take part in the AFPS. Richard has joined the army branch of the scheme. 22 days of service will be required in order for him to graduate, with almost all of these days being taken when Parliament is in recess.

DATR, based in East Leicestershire, is a training establishment for all three armed forces. It trains animals – around 200 military working dogs a year are trained for the Armed Forces, as well as 100 others for security services, such as UK Immigration Service, HM Prison Service and HMRC. Dogs are trained to detect drugs and bombs and learn how to behave in military operations. It also provides training for dog handlers and military vets. DATR also trains training for horses going to the Household Cavalry and the Royal Horse Artillery.

During his visit to DATR, Richard saw the incredibly valuable role that animals play in the Armed Forces and spoke to military and civilian staff about training and caring for the animals. Richard also met a guard dog who was injured during service and had to have one of her back legs removed, and Richard had the chance to speak to the vets about rehabilitating and retraining injured animals. Many of the animals are rehomed after service.

“I was delighted to have the opportunity to visit DATR – it was an incredibly interesting visit and I had no idea of just how vital animals are in our Armed Forces and for security across the UK.

“Having the chance to speak to military vets, animal trainers and members of the Armed Forces about the work they do was great. As a Special Adviser at the MoD I saw the brilliant work our men and women do and outings like this with the AFPS enable me to see defence policy and how defence works through the eyes of a serving soldier.

“My work with the AFPS informs my defence policy both locally and on the national stage. I want to thank DATR for hosting us for a fantastic and informative day out and I very much look forward to continuing my work with the AFPS.”