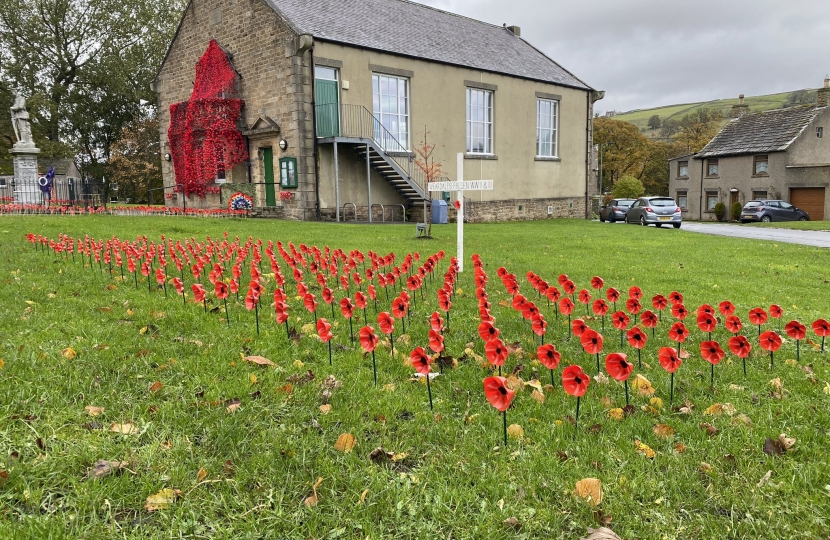 Richard Holden, MP for North West Durham, has visited St John's Chapel to see the memorial that has been created for Remembrance Sunday.

Richard has recently visited St John’s Chapel to see the Remembrance display of poppies that are currently on show. He met with Venita and Anne, who, alongside Joy and dozens of other volunteers, have spent literally thousands of hours creating sculptures as a tribute to remember those who gave their lives in both World Wars. Richard was shown the field of poppies that are on display there, which are a memorial to the 244 local people who died in World War One and World War Two.

Richard is also encouraging his constituents to get involved in Remembrance Sunday activities in any way they can. Currently. Remembrance Sunday activities can take place as long as they comply with current Government guidance, which can be found here. Local authorities can organise outdoor events at a public war memorial and these events should be focused on wreath laying.

“I was so moved by the memorials that have been created by the community and displayed at St John’s Chapel. So many people have put so much of their time into creating something really beautiful so that we can remember those who died to ensure our freedom and save us from tyranny, both in North West Durham and the rest of the country.

“It is so important that we remember those who gave the ultimate sacrifice for our country. I know that this year the celebrations will be different, but we must still mark the occasion and honour all those who have fought for our country.

“Displays like the one at St John’s Chapel are so important and I really want to thank all those who volunteered on this project again for their hard work. I encourage everyone to get involved in Remembrance Sunday, whether it’s by donating to the poppy appeal or doing something in the community.”