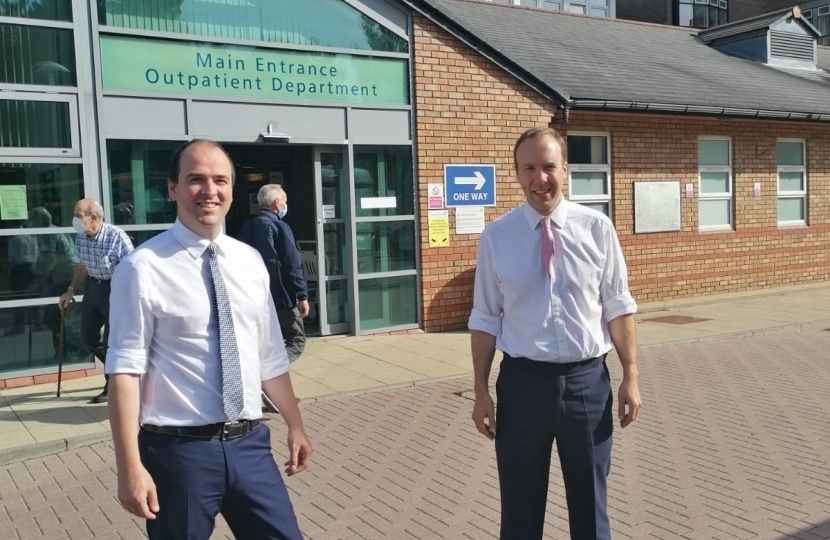 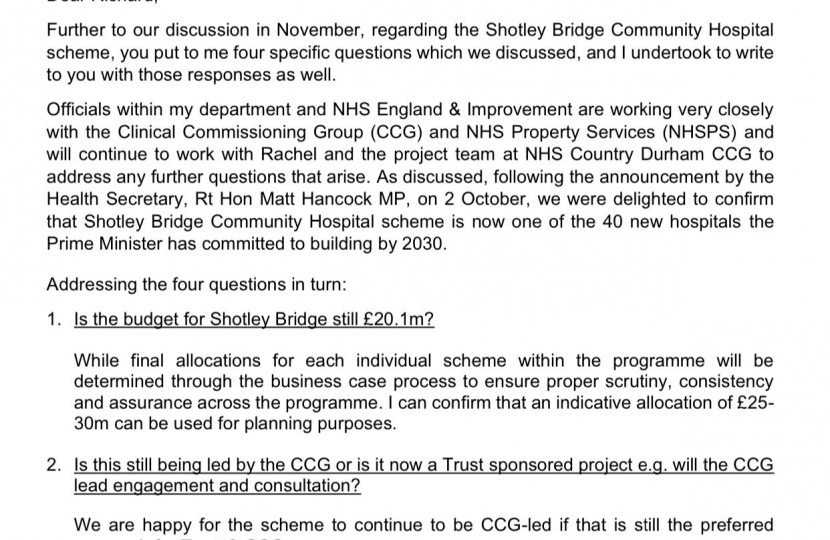 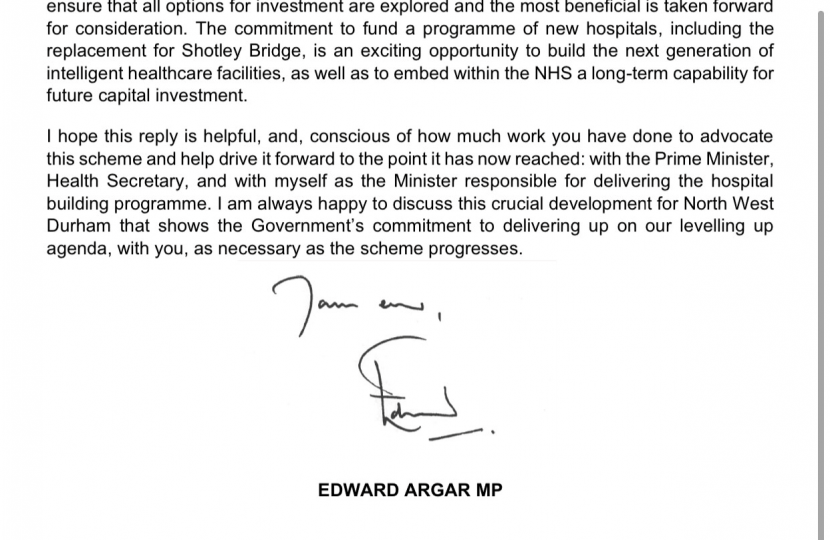 Richard Holden, Member of Parliament for North West Durham, has had it confirmed from the Health Minister, that, as a result of his campaign, the replacement for Shotley Bridge Community Hospital scheme is to receive up to £30 million in funding, £10 million more than previously allocated, taking the total funding for the project up to £30,000,000.

In a letter to Richard, Ed Argar, Minister of State for Health, confirmed that officials within the Department for Health and Social Care and NHS England & Improvement are working ‘very closely’ with the project team at NHS County Durham Clinical Commissioning Group (CCG). The Health Secretary has visited Shotley Bridge Hospital recently to meet with the CCG, which you can read about here.

The budget given for the Shotley Bridge project was originally set at £20.1m from local CCG funds but the Minister has confirmed that an indicative budget of £30m can be used, and that local control will be maintained over the project, with officials working with the local project team to ‘support’ delivery.

Richard said that the previous option proposals produced before he was elected for a no-bed or eight bed replacement facility were unacceptable and secured a debate in Parliament in which he received a commitment from the Health Minister for the replacement for Shotley Bridge Community Hospital to be part of the Government’s flagship 40 hospital building programme, to have 16 beds – formally doubling its ward capacity – and see more services moved to the new facility. You can read more about this here. Richard has previously revealed that the maintenance costs of Shotley Bridge Hospital are currently shockingly high, which you can read about here.

In his letter, the Minister also praised Richard advocacy in campaigning, stating that he is conscious of ‘how much work’ Richard has done both locally and nationally to advocate the scheme and that it was Richard’s efforts that had driven the project forward to the point it has now reached. A health survey that Richard ran in North West Durham showed that constituents backed Richard’s project – you can read about this here.

“When I was elected, I pledged to protect local services delivered at Shotley Bridge Community Hospital, and campaign for a new16-bed community hospital on a more accessible site. This is exactly what I’m delivering

“In 2001, Shotley Bridge was downgraded and for decades we’ve seen the slow move of services away. I was delighted that when I raised the issue last year that the Prime Minister said he’d look at the plans and that the Health Secretary confirmed that our new community hospital would be one of the 40 that the Government are building. With today’s confirmation from The Department of Health that they will be making a budget of up to £30m available this is a huge boost for the area and will ensure that our local NHS is fit for purpose and that the local community gets the healthcare it deserves.

“I am pleased that my efforts have been recognised by the Health Secretary and his team. This is a project that I have been working on since the day I was elected, and I will continue to work with the local NHS and the ministers on.

“I want to thank the Minister for ensuring extra funding for our area. Nothing could be a clearer sign of this Government’s commitment to its levelling up agenda in North West Durham.”