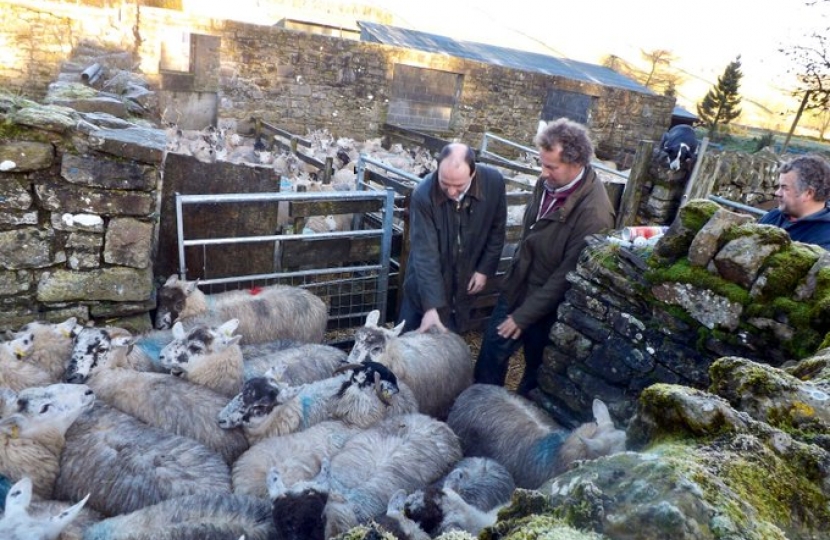 Richard Holden, MP for North West Durham, has been campaigning locally and in Westminster for farmers based in his constituency.

During the election campaign, Richard visited George and Oliver Walls’ farm, JG Wall and Sons in Western Hopeburn Farm, based in Eastgate, Weardale. JG Walls and Sons are a livestock farm and Richard met them to discuss the Prime Minister’s deal for leaving the European Union and what this would mean for rural communities and farmers.

Richard has also hosted the Environment Secretary in Rookhope, which you can read about here. They discussed the Agriculture Bill and how this will affect the Common Agriculture Policy and payments to farmers. Richard has had a number of conversations with Ministers in the Department for the Environment, Food and Rural Affairs, and is working to ensure that farmers have certainty over the future.

Richard has engaged closely with farmers from across North West Durham since being elected. Most recently, Richard has had an in-depth conversation with a number of local farmers and representatives from the National Farmers’ Union. They discussed a range of issues affecting agriculture including coronavirus and its effect both locally and nationally and the Agriculture Bill.

In Parliament, Richard has spoken in the House of Commons about financial schemes that are available for his lowland farmers to ensure that they do not miss out the schemes that upland farmers can benefit from – you can watch this here. He also spoke about his rural communities in his maiden speech, which you can read about and watch here. Most importantly, he spoke in the Agriculture Bill debate about farmers in his constituency and the future they face, as well as measures in the Bill and how these will help farmers, including the importance of the new legislation being brought forward to safeguard livestock. You can watch Richard speak in the debate here.

Speaking about this, Richard said ‘I am extremely lucky to be the MP for such a beautiful and rural constituency and have spoken to many farmers across the rural parts of North West Durham, as well as Ministers in London to ensure that farmers have clarity about the future. Each farm is so individual and farmers can face a range of issues, from concerns about livestock to leaving the Common Agriculture Policy to differences in payments for upland and lowland farmers. I am working hard to address all of these concerns and to campaign for farmers in Parliament, whether it’s ensuring that legislation works for them or that payments are fair. I am regularly contacted by constituents who are concerned about how farming could be affected by leaving the EU or the Agriculture Bill, but I cannot stress enough how important farming as an industry is for the North East and the whole of the UK and I will continue to work hard to represent those whose livelihoods depend on farming’.

If you would like to sign up to receive updates about the work Richard is doing, you can sign up by using the form on this page or by filling out the form here.