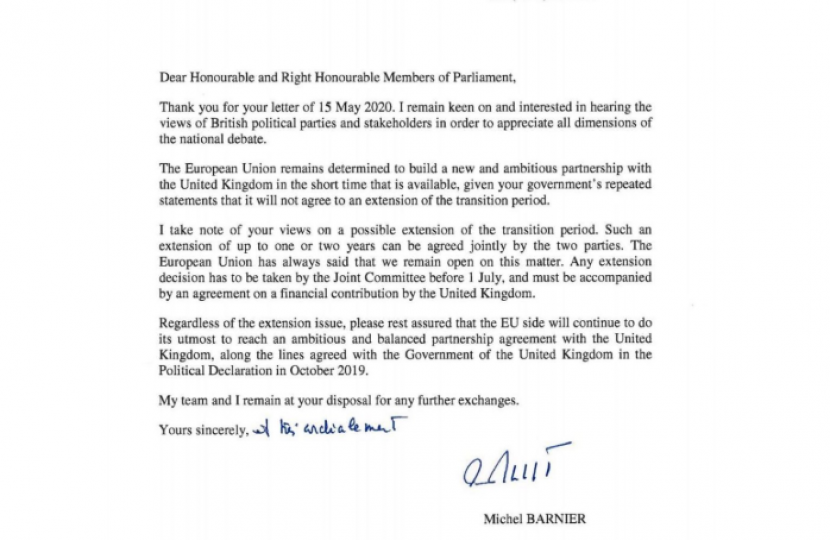 On June 23rd, 2016 the UK voted to leave the EU. In the 2019 general election I stood on a manifesto which pledged to get us out of the EU.  Labour’s position, written by their then Shadow Brexit Secretary, Sir Keir Starmer KCB QC MP, was to push for a second referendum. I was elected as the first ever Conservative MP for North West Durham. Finally, with the votes of new MPs like me in Parliament, we left the EU on 31st January this year, allowing the country to start to move on.  This would not have happened without the votes of people in North West Durham.

We are now in the transition period as we work to get a deal with the EU that works for both sides.

Over the past few days and weeks I’ve begun to receive an enormous number of campaign emails demanding that I back an extension to the Brexit transition period. These emails all say the same thing and make the same claims – but it’s clear to me they are from one source – people who want to go back on the will of the people, despite the referendum and election results which you voted in. They demand that I back an extension to the transition period, however long a proposed extension is, and publicly express my support for extending the transition period.  This pressure is coming from those who think they know better and want to ignore the will of the people in North West Durham.

This campaign is all off the back of a letter that was written to Michel Barnier, the EU’s Chief Negotiator for Brexit. A group of Opposition MPs wrote to Mr Barnier to ask if an extension to the transition period would be a possibility – he responded confirming that an extension of ‘one or two years’ could be agreed upon but that it would need to be accompanied by a ‘financial contribution’ by the UK.

I will respond, as I always do, to every single email I receive but I want to be very clear now that I do not and will not support any kind of extension to the transition period. The UK voted to leave in a democratic referendum and, whatever your opinion on Brexit, it is imperative that democracy is upheld and that we follow through with what people voted for. The vote took place almost exactly four years ago, and it has taken long enough to get to this point, and I do not support dragging it out any longer – you only have to look at the 2019 election result to recognise that, amazingly, people want us to follow through on what they voted for in 2016. The idea we should pay any kind of financial contribution to the EU for the ‘privilege’ of dragging Brexit out and facing more years of arguing is absurd. David Frost, our Chief Negotiator, has confirmed that it is ‘firm policy’ to not extend the transition, that we would not agree to any proposed extension and that we are looking for our ‘economic and political freedom at the end of this year’ – this was echoed by No 10, who have confirmed that the transition period will end on December 31st.

This is a matter of trust. Nationally Britain voted to leave. In North West Durham, we voted to leave. I will not be an MP who acts like they know better than their constituents and ignores what they voted for. I believe we can achieve a good future deal with the EU, but this won’t happen if we negotiate from a divided position or a position of weakness and the EU need to know that we are serious.  I will not undermine that position and I urge MPs and activists from other political parties to do the same.

I was voted in on a manifesto that said we would leave the EU and my job is to represent and work for my constituents and pay back the trust they put in me.