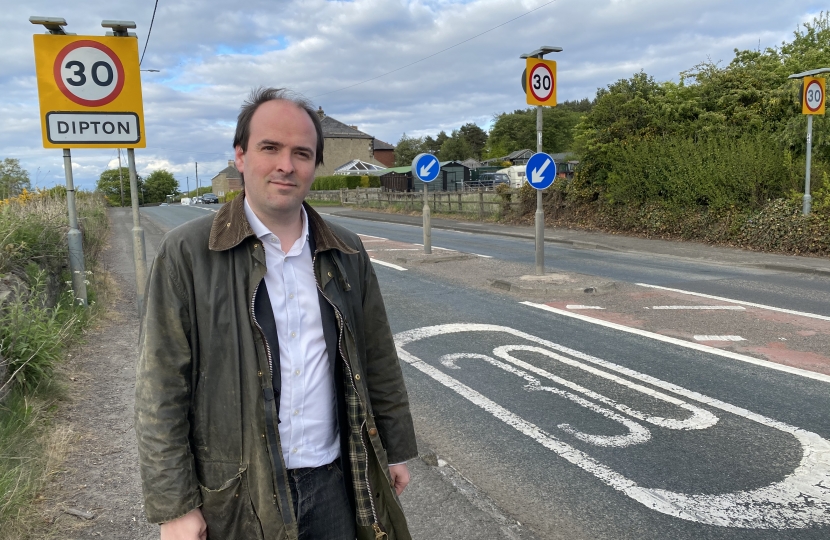 In Februray 2020, Richard spoke to a large group of local people at Dipton Community Centre who were concerned about road safety in the village of Dipton. Local people expressed alarm that vehicles were travelling through the village at high speeds, making the roads dangerous for pedestrians and upsetting the otherwise quiet village.

After hearing concerns, Richard wrote to Durham County Council, who are responsible for Highway Management locally, alerting County Hall in Durham City to the concerns of people in Dipton. In particular, Richard shared concerns raised to him by the headteacher of Collierley Primary School, as well as those of a group of visually-impaired residents who approached him.

Meanwhile, Richard has raised a number of other speeding and road safety hotspots all across the North West Durham area - in places like Burnhope, Cornsay Colliery, Fir Tree, Shotley Bridge, Castleside and elsewhere. Through this continued campaign, Richard has pushed  the Council to look again at providing a road crossing in the village.

Given the concerns that Richard has already heard from local people, Richard would like to get further information from people in Dipton about this problem and how it should be tackled. There are different approaches to road safety and high speeds - these could include a different speed limit, with a transitional speed limit coming into the village, whilst an alternative approach would focus on greater enforcement through additional speed cameras. Local feedback on how best to deal with the problem is another step in getting it sorted, pushing the Council to act.