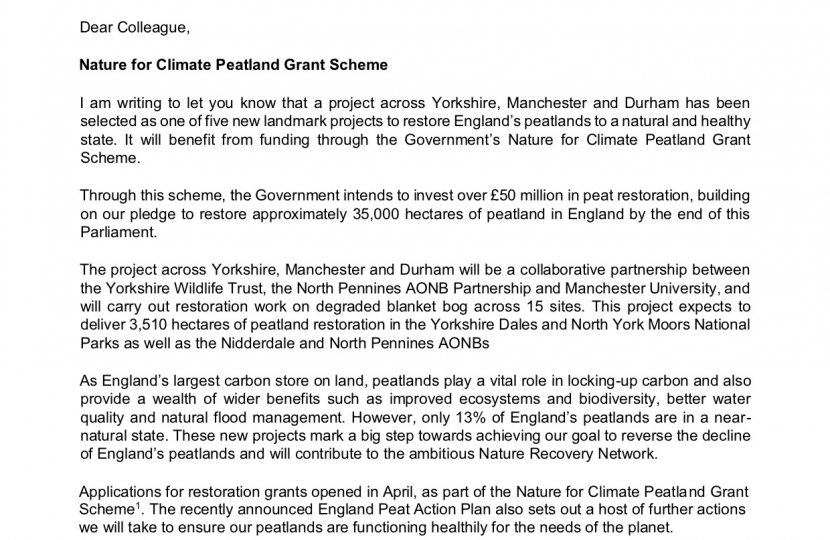 The Environment Minister, Rebecca Pow MP, has written to Mr Holden announcing a new scheme for the North Pennines ANOB

This follows Mr Holden’s visit this month, with the Environment Agency, to understand how a pilot natural flood management system in the North Pennines will see 150 hectares of peatland restored and will aim to create up to 75 hectares of woodland to help grow wildlife.

The North Pennines AONB has been selected as part of one of five new landmark projects to restore England’s peatlands to a natural and healthy state, through the Government’s Nature for Climate Peatland Grant Scheme.

As England’s largest carbon store on land, peatlands play a vital role in locking-up carbon and provides a wealth of wider benefits such as improved ecosystems and biodiversity, better water quality and natural flood management. However, only 13% of England’s peatlands are in a near natural state.

Through this scheme Government intends to invest over £50 million in peat restoration, to meet its pledge to restore approximately 35,000 hectares of peatland in England by the end of this Parliament.

“Our peatland is crucial to carbon capture and storage – in fact peatland takes in about five times as much carbon as woodland – but sadly too much has been lost over recent decades.

“This new scheme will be vital in helping turn that tide, ensuring the restoration of peatland and crucially working with local farmers and landowners to make it happen.

“Natural Peatland restoration is a great way to prevent localised effects of climate change, such as flooding and is also a fantastic and cost effective means of carbon capture and storage, helping not only our local towns and village but the whole planet as well.”