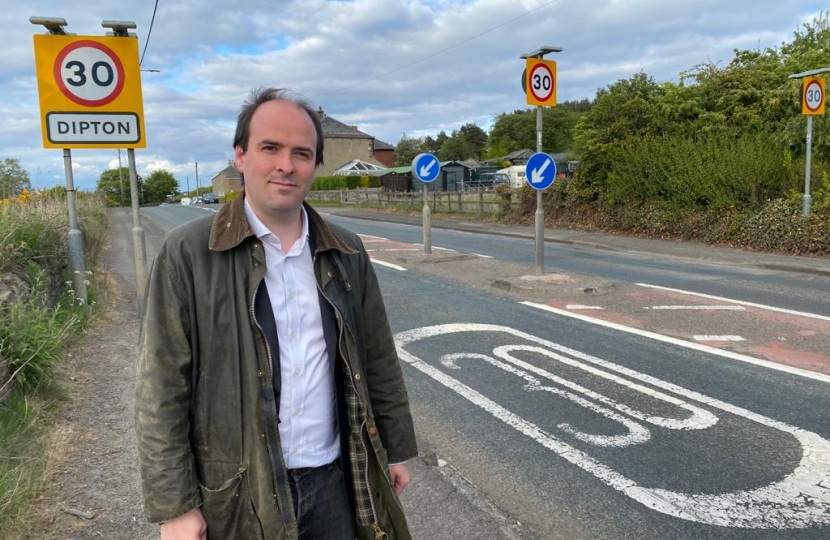 Richard Holden, Member of Parliament for North West Durham, has been working with residents of Dipton to make their roads safer.

The A692 runs directly through the middle of Dipton and is on a slope, which leads to speeding. In the evenings, the A692 is in line with the setting sun which causes dazzling – coupled with the speeding, this leads to extremely dangerous driving. In 2019, visits from the police lasting just a few hours resulted in 576 traffic incidents recorded, and lampposts and bollards have been destroyed due to accidents, leading to costly repairs needed. Residents have also had their personal property hit by speeding cars.

Richard was contacted by the Dipton Community Partnership and spoke at their community meeting in February. Residents expressed concerns about speeding and made it clear they felt the speed limits should be changed due to the lack of adequate speed control measures. Residents also pointed out that there are a lack of safe crossings, which is dangerous for both young children and blind residents; currently, there are only informal ‘crossing points’ throughout the village.

Richard wrote to Durham County Council shortly after the meeting to suggest a buffer zone, reducing speeding from 60MPH to 40MPH before the 30MPH speed limit in the village, and also suggested that a pelican crossing be placed in the centre of the village.

The Council acknowledged that there are accidents through Dipton, but stated it is difficult to confirm if the accidents are speed related and that there are no reliable figures available – often, accidents in Dipton result in an exchange of insurance details, as opposed to a call to the police. The Council also stated that road safety budgets are limited and that there have been no accidents in the past four years involving pedestrians, meaning that a crossing would not be cost effective or needed as it does not satisfy the criteria. A 40MPH buffer zone was considered appropriate but the Council suggested that the current speed limit of 30MPH in the village could then be raised to match the 40MPH buffer zone limit. It was made clear that issues the residents and Richard have raised are not considered high enough priority for any action to be taken.

Richard spoke to Dipton residents about this response at another meeting, which a large number of residents and members of Richard’s team attended. Residents made it clear that the response from the Council was not one they considered favourable. It was pointed out again that the crossings are not adequate – several members of the local community who are visually impaired attended the meeting and stressed they feel unsafe using the current crossings. Residents accepted that a new 40MPH buffer zone would be a positive change, but made it clear that it should be put in place where the road is currently 60MPH, not on the area of the road which is 30MPH, as this would result in higher speed limits throughout the village. Residents again remarked that excessive speeding is unduly disruptive to the safety and economy of the village. Richard wrote to the Council to again express his concerns and stress the need for new safety measures.

Richard has also spoken with Ms Angela McDermid, Headteacher at Collierley Primary School in Dipton. It has been suggested by residents that a new crossing be installed near the school. A number of children walk to school in the village and there are several key facilities nearby, including a pharmacy and the Jubilee Community Centre. Ms McDermid expressed her concerns about people in the being vulnerable at current crossings due to speeding, the width of the road and poor visibility.

Richard is planning to start a petition in Parliament for the introduction of new safety measures in Dipton, which would include stricter buffer zones with lower speed limits and safer crossings. Richard will be working with local businesses, local schools and residents to assess what the village needs and what residents want.

Commenting, Richard stated ‘It is clear Dipton does not currently have safe traffic measures and the residents I have spoken to are all, understandably, increasingly worried about their safety. I understand the financial constraints of the Council but would like to work with them to find a solution that Dipton residents are happy with – they deserve to feel safe in their community. I am particularly concerned about the safety of children, those with impaired vision and elderly people. Just walking around Dipton, it was obvious that people were driving too fast and there was no crossing at which people could cross safely. This is something that I would like to see resolved as soon as possible to ensure accident numbers are reduced and that residents feel safe.’

Richard spoke to residents recently and will continue to work with them and update them on his progress, both in the constituency and in Westminster, as he petitions for their safety.