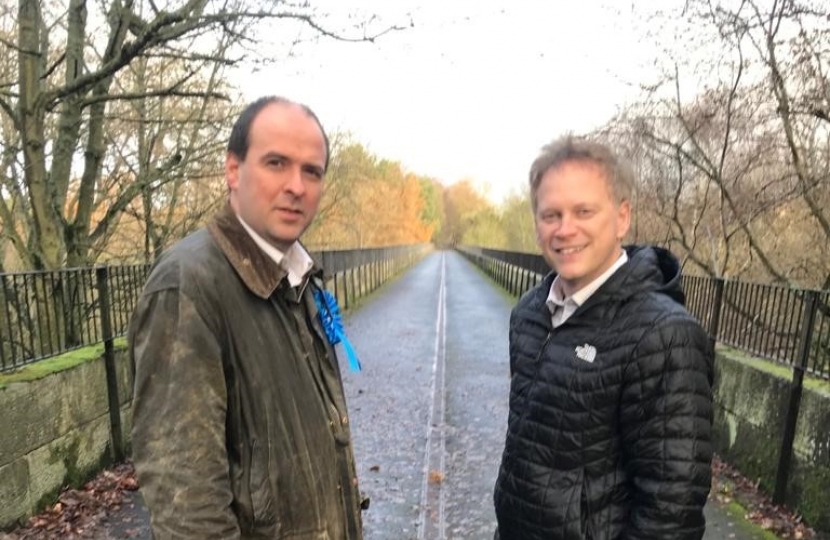 Richard hosted the Transport Secretary to launch his campaign to level up transport in North West Durham and the wider North East. They went to see the Derwent Walk, which follows the route of the former Derwent Valley Railway, a line which ran between Consett and the River Tyne. You can see them discussing transport and the old rail link here.

One of Richard’s key election pledges (which you can read about here) is to improve transport in the constituency. Richard will be campaigning for a new railway between Consett and Newcastle and spoke with the Transport Secretary about this campaign, which you can watch here. The first stage of a successful campaign would involve a feasibility study, which would determine whether the project is viable, both economically and socially, and would outline project specifications, timelines and funding. Richard also spoke with the Transport Secretary about Government funding which would be made available for the project.

Commenting, Richard stated ‘I was delighted to host Grant up here today and discuss the improvements to transport that North West Durham desperately needs. I was shocked that he had never even heard of the previous rail line – I couldn’t believe that previous MPs have not campaigned for a desperately needed link from Consett to Newcastle. A new railway would help deliver jobs and growth for our communities. If I am successful in my bid to be the first ever Tory MP for North West Durham, I will be launching a campaign to get a rail link up here, which would begin with an application for a feasibility study. I spoke with Grant about this in great detail today and am really pleased he will be backing my campaign. I’d like to thank him for coming up to North West Durham and for offering his support to our communities.’