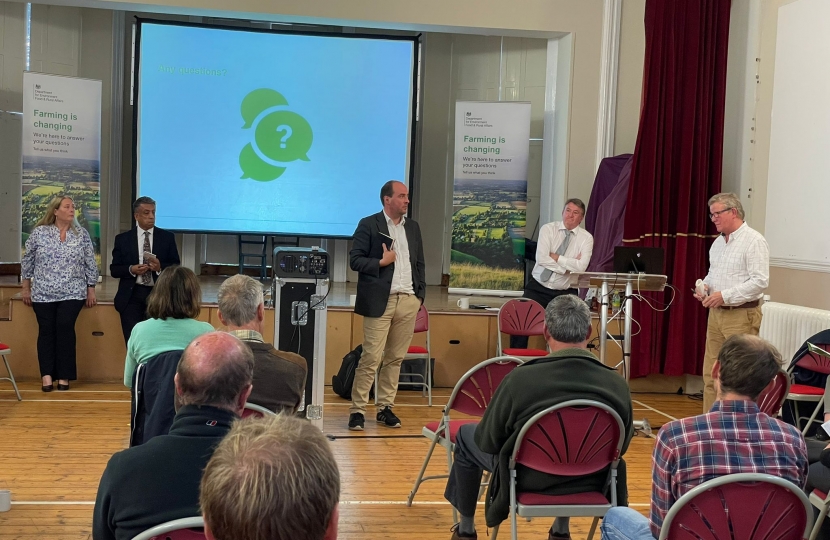 On Friday Richard Holden MP brought Paul Caldwell, CEO of the Rural Payments Agency (RPA), and other RPA and Rural Affairs Department officials to Weardale, to meet with local farmers to explain themselves directly and answer questions on the future of farming.

With the great opportunity leaving the EU and the byzantine Common Agricultural Policy affords, the RPA is now responsible for the farming and environmental payments transition through their Future Farming and Countryside Program.

However, the roll-out of the scheme has met some difficulty, frustrating local farmers, who have long been calling for more clarity around how the scheme will work beyond its first stage.

Richard Holden MP chaired the round table, bridging both sides, as officials came up from London and farmers across the constituency were invited to Stanhope village hall in Weardale.

“Farming is not a business with tight margins and fast turnarounds. It works in seasons, decades and generations. That is why when I met with farmers across North West Durham they all asked me for clarity.

"It was insightful and useful to have senior officials, including the Chief Executive of the RPA and senior policy officials from DEFRA who are working on the Environmental Land Management Schemes (ELMS) programme up in North West Durham this weekend. Thank you also to all the farmers who came along and raised so many important questions.

"The key take-aways are that timing remains an issue as it won’t be until November that details of the initial tranches of the Sustainable Farming Incentive (SFI) are made clear. It was however good to hear that the rates for Countryside Stewardship (CS) schemes will be increased - including for those already in agreements. Finally the issue of land being sold purely for tree planning - as happened recently in Wales - is clearly a worry. It is an issue I will continue to raise as it looks like some of the Forestry Commission programmes look like they may need tweaking.

"Having said all that, getting these senior officials who are working on the programme into Co. Durham for the first time in a very long time was great and there does seem to be a clear desire to learn from the failures of the past at the RPA, in terms of rollout. I’ll certainly be holding them and DEFRA to that."