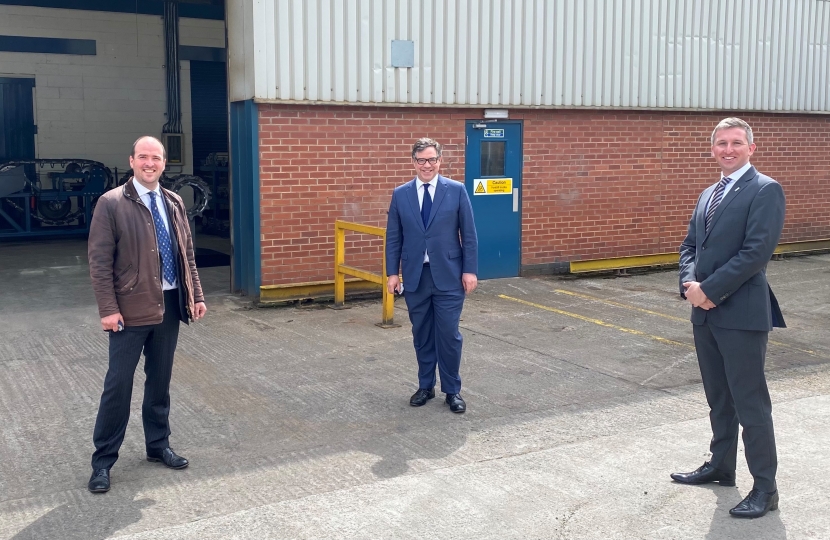 The UK company is the world’s leading independent designer and manufacturer of track systems for armoured vehicles. Its tracks are in service on almost all the tracked vehicles in the British Army and with many other armed forces around the world.

Richard, along with the Minister for Defence Procurement, Jeremy Quin MP, visited the company in Stanhope, County Durham, to announce the contract extension, tour the world-class facilities and meet representatives of Cook Defence Systems. This was Richard’s second visit to the company (read about the first one here) and Richard extended an invitation to the Minister last summer, which you can read about here.

The company is also supplying tracks for the AJAX programme, the next generation of armoured fighting vehicles manufactured by General Dynamics UK for the British Army.

Cook Defence Systems has invested £5m in its Stanhope site since 2019 to expand its manufacturing and testing capabilities and will invest a further £1m this year on new equipment including a new heat treatment facility and a new robotic digital X-ray inspection system. It employs 125 people in Stanhope, almost 80 per cent of whom live in Richard’s North West Durham constituency. The firm is one of North West Durham’s largest employers and a key provider of apprenticeships in engineering

“While we supply our products to British allies around the world, this export success is underpinned by our status as a strategic supplier to the UK MOD. We are proud that our products keep the British Army ready for a real fight against a real adversary. Our tracks keep British tanks moving and our steel keeps British soldiers safe.

“As our most important customer, we were delighted to have the opportunity to show the Minister for Defence Procurement our world-class track design and manufacturing facilities here in the North East of England.”

“It was an absolute pleasure to visit Cook Defence Systems, which is a world-leading firm based at the heart of North West Durham, with Jeremy Quin MP.

“I received an assurance from Jeremy last summer that he would visit Cook Defence Systems and I am delighted he has now been able to see in person the company’s work and the investment it is making, both in the defence of our country and in North West Durham and Stanhope. The company’s long-term plans and job creation and apprenticeship schemes for young people are particularly welcome.

“I look forward to continuing to work with Cook Defence Systems and the Minister going forward and am delighted the company has received recognition on the national stage for the significant work it does.”