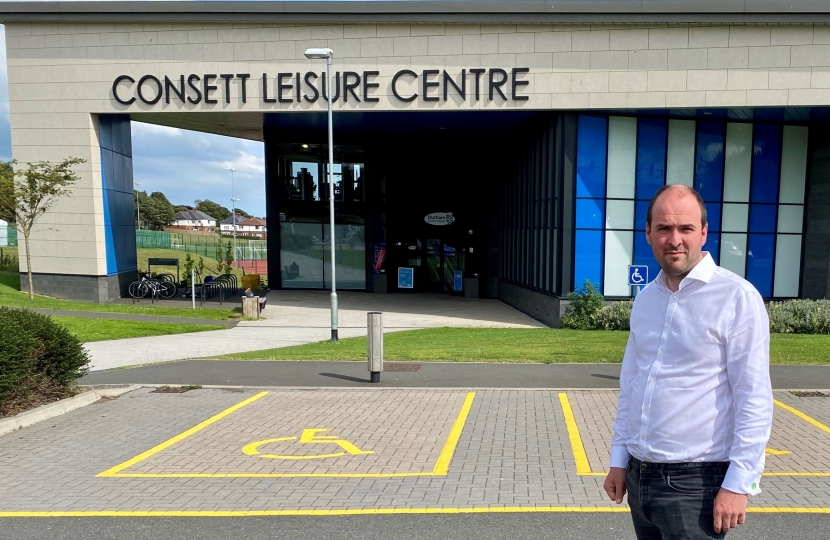 Richard Holden, MP for North West Durham, has written to Durham County Council to ask for an urgent update about Consett Swimming Pool.

Consett Swimming Pool, which is within the Consett Leisure Centre, was closed before the coronavirus pandemic hit to enable building works to take place, but it has now been announced that it will be closed for ‘months’ following recent investigations that have taken place.

Prior to its collapse, Carillion was used frequently by Durham County Council to build schools and public buildings across the constituency. In 2013, Carillion were awarded a contract to build a new leisure centre and swimming pool in Consett. In 2018, the council took control of the building and the swimming pool. The closure of the pool was initially meant to be short-term, but investigations of the site have revealed that there are badly cracked tiles, leaks, water loss, poorly fitted and maintained electrical cabling and problems with the flooring in both the gym and the squash courts.

Richard has been contacted by a large number of constituents who have expressed their concerns that the swimming pool is likely to remain closed until April of next year. Richard has written to Durham County Council to voice his concerns about the lack of transparency surrounding the closure and has asked for an urgent update about the situation at the swimming pool. Richard has also asked for information about whether further building works will be required at other projects Carillion led in North West Durham, and what the duration and cost of these potential closures would be.

Commenting, Richard said ‘I am really concerned that the Consett Swimming Pool will be closed for months. Not only will this have an enormous impact on the local community, but it is very worrying that such a new building should need such major repair work. These issues only came to light when the pool was first closed, and I am concerned that the maintenance and the upkeep of the facilities were not a priority. The safety of all my constituents is, obviously, a top priority and I am urgently asking the Council to ensure that further building works carried out by Carillion do not have major defects or issues. I completely understand the distress and frustration of all my constituents who have been staying safe and doing their bit for the community during lockdown and have now been told they are not able to use our fantastic public facilities as restrictions ease.’