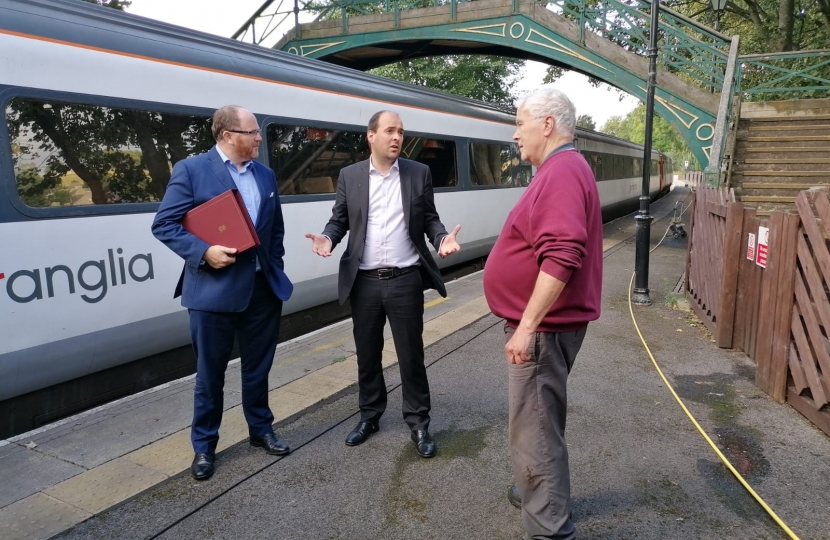 On Friday Richard Holden, Member of Parliament for North West Durham, brought the Science and Innovation Minister, George Freeman MP, to Weardale to further press his bid to have the Weardale line re-opened.

The Weardale Railway was part of a line which originally ran from Bishop Auckland to Wearhead. The heritage service that used to run along the line closed now for two years. Richard is leading a campaign for a feasibility study to look into reopening the line, with a link to Crook (line closed in the 1960s) via Howden-le-Wear, alongside a bid for walking and cycling routes.

With Rail Minister Chris Heaton-Harris having visited Wolsingham station to discuss the bid, Mr Freeman is the second minister to praise Mr Holden’s efforts to look at the line’s future, as part of the levelling up bids for County Durham.

Richard has already received the support of the Teesside Mayor, Ben Houchen, and fellow County Durham and Darlington MPs: Dehenna Davison, Paul Howell and Peter Gibson, so showing Minister Freeman the stations at: Wolsingham, Frosterley and Stanhope and the possibilities for greater connectivity that they bring is another bid step in the right direction.

“ I was pleased to be able to show George around Weardale. There is just so much potential for this line in connecting up our towns and villages, levelling up access to employment and education, and providing a real boost to local businesses from Crook to Chapel.

“It can only be a good thing that as the bid rests with the Department of Transport that key ministers from other departments can see what I and other Conservative MPs are trying to deliver for our constituents.

“Restoring the Weardale Line would be a huge boost for our area, help level up local connectivity and drive forward the agenda that our towns and villages need.”

“If levelling up means anything it means bringing science, technology, innovation and opportunity up these lines.

“To me if we can get the science and the innovation down in Darlington, The Freeport, NetPark and make that accessible to the communities in Crook and Weardale then local people will start to be connected to an innovation corridor.”