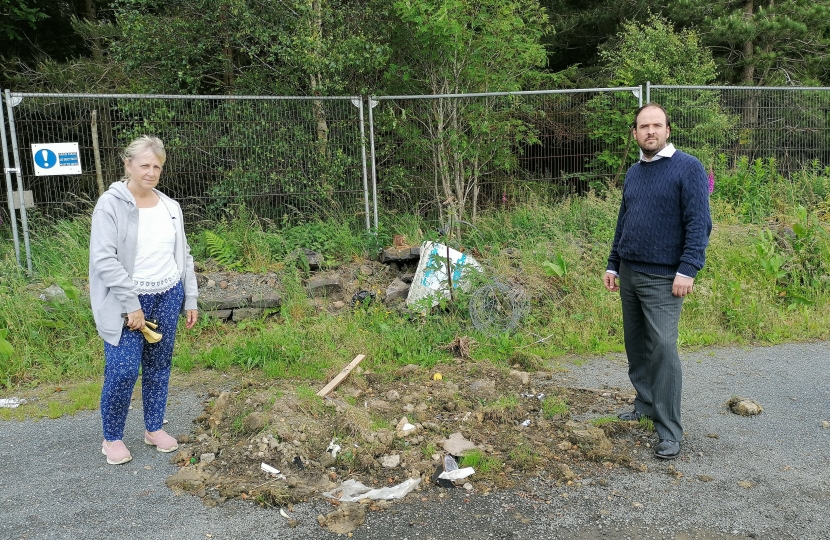 Fly-tipping has, sadly, become more common in North West Durham recently. Richard has been working on a ‘Lockdown Litterpick’ to clean up our local areas and ensure that the environment is maintained and kept clean. You can read about this here. However, fly-tipping has become more commonplace and Richard has been contacted by several constituents who are extremely concerned about this illegal behaviour and are looking for ways to prevent it and how to clean up the area.

Richard visited a fly-tipping site on Knitsley Lane recently to see some rubbish that had been dumped there and to meet with a constituent who was extremely worried about the damage it was doing to the local area and the illegal behaviour. Richard wrote to the council about the fly-tipping site at Knitsley Lane and has asked if the council can take any measures to prevent further people dumping their rubbish there in the future and asked for a 'long-term solution'. The council confirmed that the waste had been removed from the area but that the lay-by is used by Highway colleagues, meaning closing or restricting any access to the area would not be possible - they suggested that constituents continue to report fly-tipping to the council, either online or by calling 03000 260 000.

The waste disposal site at Annfield Plain was closed down when the coronavirus lockdown restrictions were implemented, and this may have led to more people disposing of their rubbish illegally. The site has now reopened. In 2011, the waste disposal site at Leadgate was shut down, despite a petition that over 1000 people signed to keep it reopen as it was used by people across North West Durham.

Richard’s team have written to the council to see if a site at Leadgate could potentially be reopened and have asked for a breakdown of statistics about fly-tipping to get an idea of the pattern of illegal activity. Richard will be getting in touch with the council to discuss the issue of fly-tipping more generally. Richard has also visited several fly-tipping sites in the constituency to see the problem first-hand and to see the damage that it can cause.

Commenting, Richard said ‘Fly-tipping is totally unacceptable and illegal and causes real damage to our local communities and local areas. It is becoming a real issue for parts of the constituency and I will be campaigning to prevent it and will be working with residents across North West Durham to ensure that our communities are kept clean and safe. I’ll be getting in touch with the council about the issue. I know that some people have real difficulties getting to waste disposal sites and that the services are not in place for everyone to have easy access to a site, but this does not excuse this illegal behaviour. I am disappointed that known fly-tipping areas will not be closed off by the council - it only means that they have to spend more money in the longer-term cleaning the areas and it does not discourage illegal behaviour. If you see fly-tipping, I highly encourage you to call the council’s hotline or, if it is in an area that could lead to it being dangerous, to call the police.’