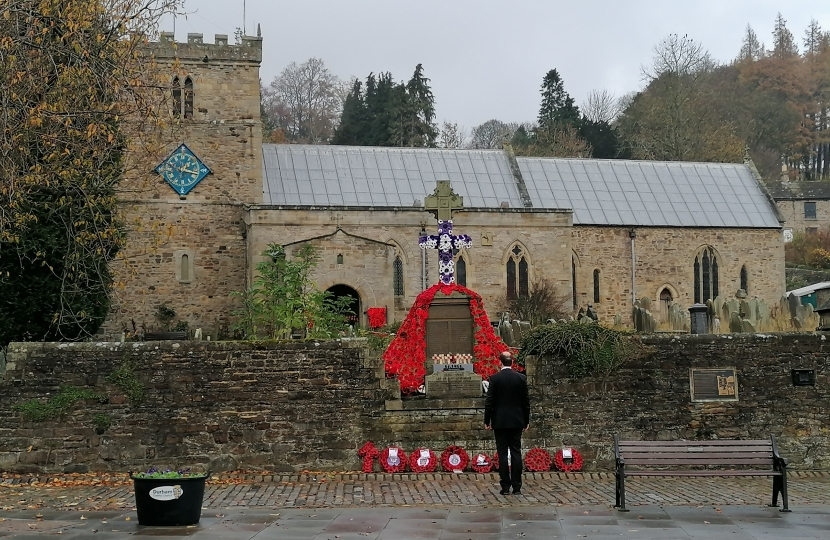 Richard visited Consett War Memorial on Remembrance Sunday at 11am for the two-minute silence, along with a group of constituents, who remained socially-distanced. Bagpipers played and there were a number of veterans, some of whom had put their medals on display.

Richard also visited and distributed ten wreaths and poppies at locations throughout the constituency, including in Dipton, Medomsley, Muggleswick and Tow Law. The wreaths were provided by Vera Parnaby, a resident of Consett, who has devoted 75 years of her life to campaigning for the Royal British Legion and has now raised over £1,000,000 for them.

Richard attended a Remembrance Service at Castleside Old Church Yard in the afternoon. He has also visited St John’s Chapel to see the memorial that has been created there, which you can read about here.

“It was an honour to be invited to visit Consett War Memorial and to attend the Remembrance Service at Castleside, as well as to be able to lay wreaths throughout our constituency.

“The wreaths I laid were provided by our very own Vera Parnaby, who has done an extraordinary amount of work throughout her lifetime to raise money for the Royal British Legion. I can’t thank her enough for the fantastic work she has done, and I know that there are many people across the country who are very grateful for her work.

“I was so pleased to see that so many people had come out to pay tribute to those who have fought for us. We must remember and honour every single man and woman who has fought for this country and given their lives so that we may have our freedom. We must never forget the sacrifices they made for us.”